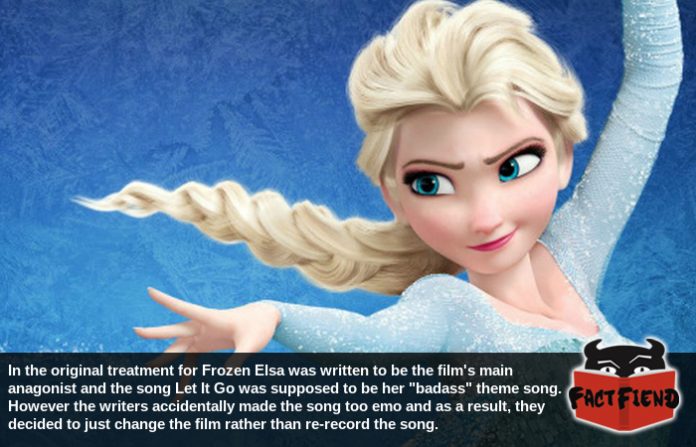 Let It Go is so stubbornly catchy that listening to it on Spotify automatically installs Pokemon Go onto whatever device you’re holding. In addition to selling like 10 million records, the song is also notable for being so good it basically changed the entire plot of Frozen.

You see in early treatments of Frozen back when it was a more direct retelling of the Snow Queen Elsa was supposed to be a generic Disney villain complete with a sick-awesome haircut reminiscent of Hades’ punk phase. 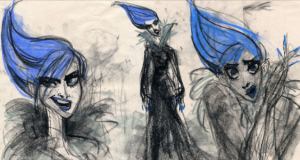 To help sell Elsa as the ass-kicking dick-stomping ice witch she was, Disney asked songwriters Kristen Anderson-Lopez and Robert Lopez to write her a “badass” theme song. As an aside the reason badass is in quotes like that is because according to the songwriters themselves, that’s literally the only direction they got from Disney about how the song should sound.

While workshopping ideas though the duo came to the realisation that they didn’t really see Elsa as a cartoonishly evil cryomancer who wanted to rain ice and death from the heavens, but rather a conflicted and emotionally troubled young woman with a terminal case of resting smug face. 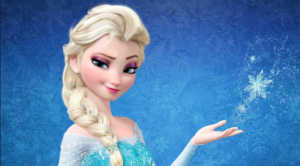 The duo would later note that they saw wrote as a sort of celebration of Elsa’s new found freedom, intending it as being representative of her no longer feeling ashamed of abilities she’d been forced to hide her entire life. To really get into the mindset of an emotional teenager, the pair then listened to a bunch of angst-filled emo music and let that inform the tone of the song. The most obvious reference to this being the line “The cold never bothered me anyway” which the Robert Lopez would later call the song’s “Avril Lavigne line” because of the sarcastic, bitchy way Elsa delivers it.

Although Disney positively loved the song with one producer claiming to have listened to the demo non-stop in his car for 7 weeks, it didn’t really fit with the intended tone of the film or Elsa’s characterisation at the time. Not wanting to scrap the song (because holy shit have you heard how catchy it is?) it was agreed that they’d instead just change the entire fucking movie to fit around the lyrics. As a result Elsa’s character was changed from a heartless snow witch who gleefully tried to quite literally ice her sister, to a more sympathetic character little girls the world over could empathise with.

Considering the film grossed like a billion dollars and the song ended up being played so much some parents can no longer close their eyes without hearing it, this was probably a good choice.