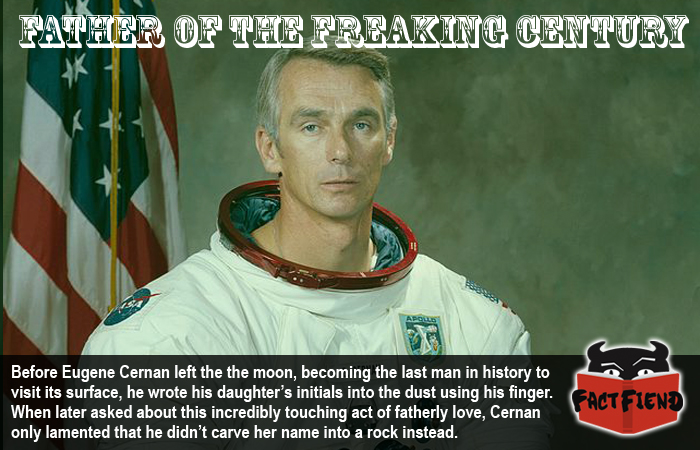 Eugene Cernan may not be the first name that leaps to mind when you hear the words “man who walked on the moon” but it certainly should be after you hear what he did when he went up there.

Famous for being the last human to set foot on the surface of the floating neighbour we like to call “the Moon” Cernan took part in both the Apollo 10 and Apollo 17 missions, the latter of which we’re going to talk about today.

The Apollo 17 mission which launched in December of 1972 was the staging ground for a number of exceedingly complex experiments we won’t get into today because they’re not relevant to the story we’re here to tell. All you need to know is that just before the lunar module was set to leave the Moon’s surface, Cernan dropped to one knee and used his finger to carefully etch the letters “TDC” (his daughter’s initials) into the dust, where it will likely remain for the better part of a million or so years.

But this is where the story gets even better. A few years later, Cernan was hanging out with fellow moonwalker turned painter Alan Bean giving him some background info on the mission for one of his paintings when he noticed a familiar sight in one of his current pieces of work, a big-ass rock the Apollo 17 crew had encountered and studied while on the Moon.

Cernan lamented to Bean that if he’d known that the rock was going to be such an iconic part of the mission, he would have taken a minute to write his daughter’s name onto it in between taking selfies and looking fly as balls.

Bean took this to heart and a few days later he called Cernan to let him know that he’s made a few changes to the painting, mainly that the big-ass rock now had the word “Tracy” very clearly written across the side of it. When Cernan asked why Bean had done this, Bean very of matter-of-factly said that he did mostly to save Cernan the trouble of “having to go back and do it himself” because astronauts are kind of awesome like that. Bean dubbed the painting “Tracy’s boulder” and we can share it here because Bean very kindly released a version of it into the public domain, again, because astronauts are awesome.