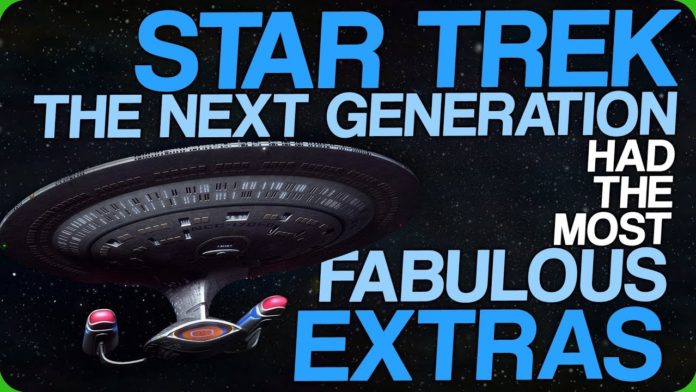 Extras in TV shows are supposed to be little more than window dressing, people hired to stand around and fill out the background of a shot so that fictional universes don’t look like they’re totally devoid of life. However sometime they offer subtle clues to the state of the world they live in. For example, a couple of background actors in Star Trek: The Next Generation show that the sexes of that universe have finally achieved complete, unequivocal equality.

We know this because in the background of a couple of episodes of Star Trek: TNG, you can see male actors wearing, what’s known in the Star Trek universe as a skant. Basically a form-fitting mini-dress that looks just, like, so fucking cool. Especially when its accessorised with a rad pair of leather boots. 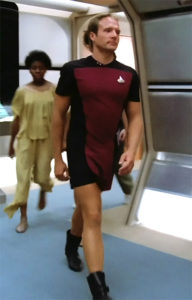 Although there are only handful of episodes where you can actually see male crew members wearing these things, the implication is pretty clear. Nobody in the 24th century really gives all that big a fuck about the concept of gendered clothing. The book, The Art of Star Trek, describes the skant as a “logical development” for the universe given that in the 24th century things such as race and gender are no longer considered something people give a shit about.

This is actually a pretty popular theme in Star Trek and every series has gone out of its way to show that in the future, concepts such as race and gender are no longer a barrier to success. Going right back to Star Trek: The Original Series, series creator, Gene Roddenberry famously insisted upon hiring a racially diverse cast to highlight this very idea.

The show also famously featured one of the earliest known examples of an interracial kiss in television history. Curiously, although NBC was reportedly very worried about any potential offence showing a white man kissing a black woman may cause, it’s reported that the only complaint the cast received was a letter from a mildly angry southern man who opposed the mixing of races, but admitted that he couldn’t blame Captain Kirk for wanting to hit that. 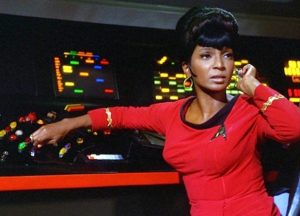 Hell, the Star Trek universe is fucking progressive that they don’t even give a shit about people being bald. We know this because Roddenberry once slapped down a smart-ass reporter suggesting the casting of Patrick Stewart, a bald man, to play Captain Picard was stupid by asking in a painfully smarmy tone of voice.

“Surely by the 24th century, they would have found a cure for male pattern baldness?”

By responding, “by the 24th century, no one will care”, presumably before flying through the air to dunk endless basketballs through a hoop that materialised 11 feet above their head.

With this in mind, please consider the fact that supposed fans of Star Trek recently criticised the casting a black woman to play the role of captain in Star Trek: Discovery because it’s not faithful to the roots of the series.