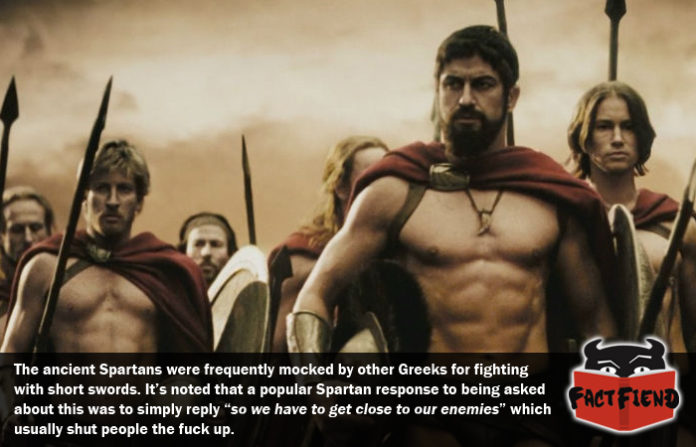 Thanks to films like 300 and to a lesser extent, 300 – 2 (We’re all on boats this time), we all know that in the world of ancient Greece, you didn’t fuck with the Spartans unless you wanted your ribs to be uppercutted into your lungs. Which makes it kind of surprising that there a multiple accounts of ancient people making fun of Spartan soldiers’ swords, to their faces and getting away with it.

According to historians and the kind of weirdos who think collecting swords is cool, the Spartans only ever really carried three weapons into battle: a long spear called a dory, a short sword called a Xiphos and their iconic brass shields, which could be used as a make-shift bludgeoning tool or massive Frisbee as and when the need arose. 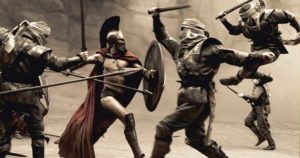 The Spartans were also masters of unarmed combat and were infamously so good at Pankration (an ancient martial art similar to a cross between boxing and wrestling) that they dominated every Olympics in which it was an event for centuries.

Using a combination of these four things, Spartans were largely invincible on the battlefield and there are only a handful of examples from history of them ever being defeated. And even then, it only usually happened because the opponent peppered the Spartans with arrows from afar until they gave up.

With that in mind you’d think people back then would have been smart enough to give the Spartans a wide berth and not, say, tell them that their favoured weapon was kind of shitty. But weirdly that is exactly what people used to do. You see, when we said that the Xiphos was a short sword, we really meant it. While few examples of this weapon have survived through the ages, historians have concluded that Spartan short swords were often only about a foot long. As you’d expect, there was a pretty sound reasoning behind making the Xiphos this short and it basically boiled down to, the Spartans really liked stabbing their enemy. Like, a lot.

Because the Spartans liked to fight in extreme proximity to their opponent, the Xiphos was intentionally made as short as possible so that it could be wielded effectively during the Phalanx formation, AKA, the pain wall.

As soon as the enemy rushed against that formation, Spartan soldiers would use the Xiphos to safely punch through a small gap directly into the enemies penis. That’s not us being crude, historians have noted that Spartans would routinely aim for the dick in combat, both because it was effective and because they knew nobody would want to fuck with them if they thought their dicks were at risk of being stabbed.

And yet, people in the ancient world still made fun of the Xiphos for being short, even though they had to have known that it was designed that way on purpose to facilitate the act of dick stabbing. In fact the Spartans were so used to people making fun of the Xiphos that soldiers often had a number of comebacks lined up for when it inevitably happened. In one famous case, an anonymous soldier was once asked by a derisive asshole why the Spartans fought with daggers, to which he answered “because we fight close to our enemy” presumably before rolling his eyes and walking away.

Another time, a Spartan was mocked by an outsider who claimed sword swallowers only used Spartan swords because of how short they were, the Spartan laughed and said “and yet we can still reach our enemy“. There’s also a recorded instance of a young Spartan recruit lamenting to his mother that his sword was too short, to which she responded “Add a step to it” basically telling him that his sword was only too short because he wasn’t close enough to stab anyone. Boy did Spartan mothers know how to parent the fuck out of their kids back then.