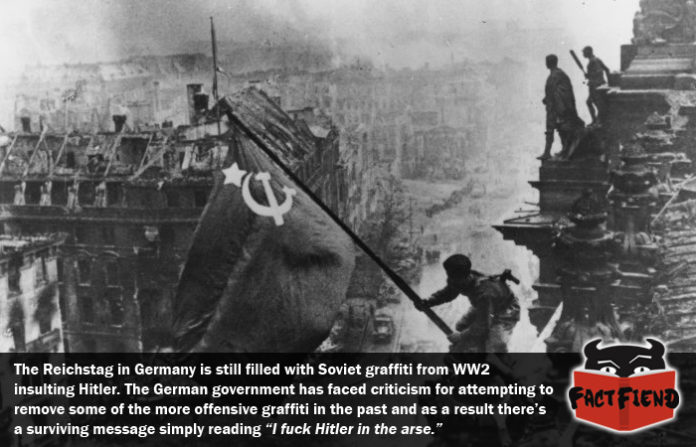 The Reichstag is a large impressive building located in Berlin that serves as a meeting place for the German parliament that also just so happens to be full of Soviet graffiti telling Hitler to eat a dick.

Though Hitler never actually set foot in the building during WW2 the building was nonetheless seen as being key to his rule, so much so that it’s storming and capture by the Soviets in 1945 is considered by many to be the symbolic end of the conflict.

As you can imagine, following one of the most bloody and brutal campaigns in military history, the Soviets were a little pissed upon capturing the building and decided to show this by royally fucking it up. Soviet soldiers shot holes in the walls, kicked stuff over and generally acted like drunken douchebag frat boys loaded on Jagermeister. Perhaps the most obvious example of the frustration felt by the Soviets however is the countless insults they wrote on the building’s walls.

While many Soviet soldiers opted to simply write or carve their names into the Reichstag’s walls, some soldiers got a little more creative and wrote things like poetry, how many Nazis they’d killed and most hilariously of all, messages telling Hitler to go fuck himself.

These more obscene message posed a problem for the German government in the early 90’s when the decision was made to refurbish the dilapidated building to once again serve as a meeting place for the German Parliament. On one had, they couldn’t remove the graffiti because it represented an important part of their heritage and any attempt to remove it could be construed as trying to censor history. On the other hand though it wasn’t really all that professional for Germany’s parliament to meet in a building with “Fuck Hitler” written on the wall.

After much deliberation a decision was reached to persevere a small part of the original Reichstag to serve a memorial of sorts to the soldiers of WW2. It’s reported that the Russian government “encouraged” the German government to remove some of the more NSFW insults out of embarrassment, which they did. Thankfully one heroic Soviet soldier during WW2 had the foresight to write his particular message to the Fuhrer amongst some of the more heartfelt messages left by his comrades, meaning the modern German government were unable to remove it. As a result this unknown soldier’s message is the only obscene one left and as noted at the top of this page, it simply reads:

“I fuck Hitler in the arse.”

Which is kind of beautiful, don’t you think?