Hot Fuzz is a lovingly crafted homage to 80’s action movies that at one point or another lampshades or references nearly every hackneyed cliche or trope from the genre. It also featured two brief clips from movies that inspired it, something it turns out were a total ball-ache to film.

You see, about a third of the way through the movie Simon Pegg’s character, Nicolas Angel, sits down and watches the films Point Break and Bad Boys 2 while shit-faced on wine and beer. During the scene we the audience are shown a clip from both Point Break and Bad Boys 2, both of which are directly parodied by the cast later in the movie. It’s a brief, throwaway moment used mainly to illustrate that yes, the two characters on screen are actually sat watching a movie. 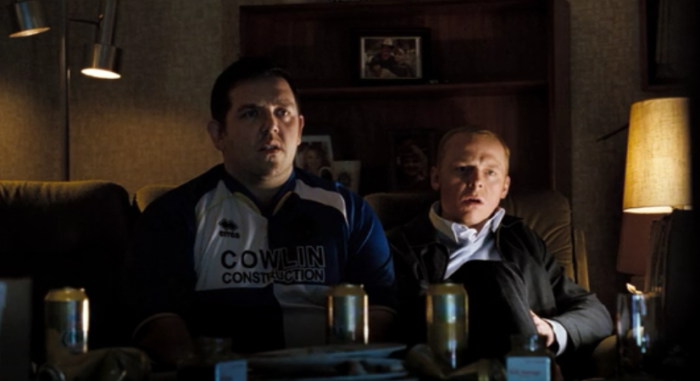 Now you’d think a scene involving a static shot of two people watching a movie would be a piece of piss to film, right? You set up a camera, get Simon Pegg and Nick Frost to shoot the shit for 20 minutes, splice in some footage from a shitty action movie and boom, fix that fucker in post. However according to Edgar Wright this singular moment was one of he most costly and difficult to realise in the entire film. This was mainly due to needing to have permission from everyone involved with the 12 seconds or so of footage they used from both films. For example, to use this clip from Point Break.

Someone had to call up both Patrick Swayze and Keanu Reeves and ask for them to sign off on their likenesses appearing in the film before cutting 20th Century Fox, who hold the rights to the film, a fat cheque. Now this in of itself sounds like a hassle but we’re not done yet. You see for one brief moment in the scene from Point Break shown in Hot Fuzz you can see the back of Patrick Swayze’s character as he climbs over a fence …

The thing is, that isn’t Patrick Swayze, it’s his stuntman and because his likeness technically appeared in the Hot Fuzz he needed to sign off in it too. Yes, even though you literally only see the back of his head for half a second and he’s wearing a mask the entire time.

In addition even getting permission to show the covers for the DVD of each film was a total legal clusterfuck and involved paying the respective rights holders a shit ton of money. All this for to show the cover of a DVD they probably bought for like 2 dollars from the bargain bin at Walmart. Which probably explains why when they actually showed a DVD bargain bin in the film they just filled with a bunch of copies of Shaun of the Dead. 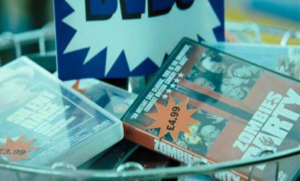 Then again knowing how much bullshit they had to go through to show a 5 second clip of Point Break we wouldn’t be surprised if Edgar Wright had to get written permission from himself to put that in the film.