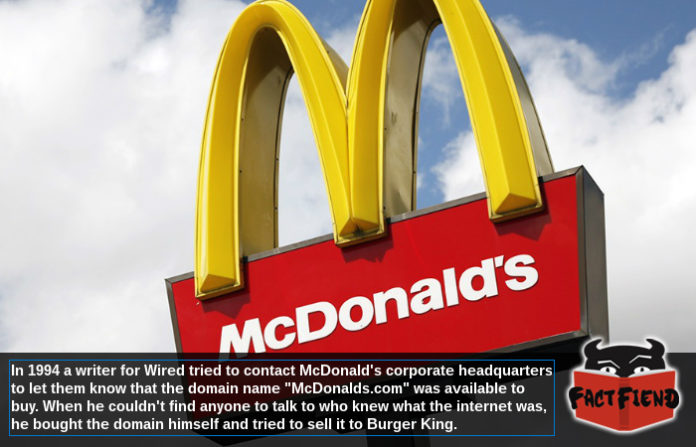 McDonald’s, as a monolithic billion dollar company responsible for more cases of childhood obesity than Gameboy’s and Doritos combined, obviously has an internet presence. Back in the 90’s though the company was so unaware of what the internet even was, they didn’t even bother to buy the domain name, McDonalds.com.

This was discovered by a writer for Wired Magazine called Joshua Quittner back in 1994 who helpfully called the company to let them know that it was available for sale and that as a massive company, they should probably look into buying it. Quittner called the company’s PR department and gave them a brief rundown of what the internet was and how tech savvy companies were using it to expand their business online, to which the PR rep responded “what’s the internet?”

Quittner attempted to explain to the PR rep that the internet was probably going to be a big fucking deal in the not too distant future and informed them that, at the exact moment, someone, anyone could register the name, even Burger King. The rep basically told Quittner, “oh, that’s cute” before hanging up. Realising nobody at McDonald’s was going to take him seriously, Quittner went right ahead and registered the domain himself.

After attempting to contact McDonald’s multiple times to tell them that if anyone searched their company’s name online it would lead directly to a website he owned that he could fill with dicks or messages saying their burgers were made from ground up cat turds and getting nowhere, he decided to contact Burger King. Like with McDonald’s nobody at Burger King had any fucking idea what the internet was and told him they weren’t interested in buying McDonalds.com since it had nothing to do with them. Curiously, the company also informed him that they weren’t interested in owning BurgerKing.com either.

Since neither company would give him the time of day, Quittner took the website for himself and left a message on the frontpage saying that if anyone was interested in buying it, they could contact him at ronald@mcdonalds.com. 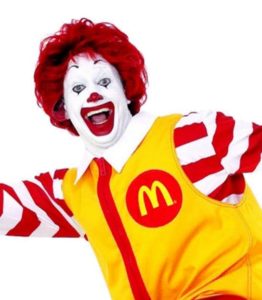 A few weeks after he published the article revealing that he owned the domain name, McDonald’s reps were forced to sheepishly email Quittner at an email address named after their own mascot asking for it. Quittner, who’d consulted a legal expert and found that he was within his rights to hold onto the domain for as long as he damn well pleased, informed the company that he’d be happy to hand it over, for a price.

Despite the fact he could have probably asked the company to buy him a red and yellow Ferrari and unlimited Big Macs, Quittner instead asked the company simply to donate $3,500 to a public school in New York so they could buy a bunch of computers. McDonald’s who’d presumably had no fucking idea what a computer was, readily handed over the cash to stop Quittner selling the domain to Taco Bell or some shit. 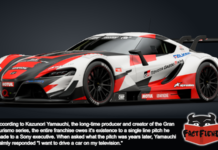