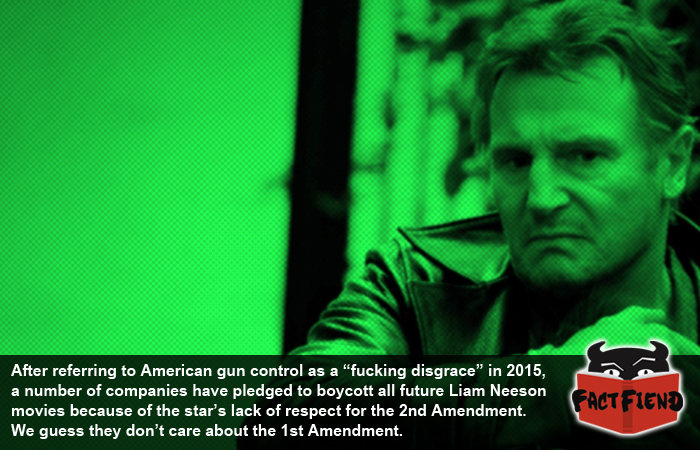 Although Liam Neeson cut his teeth in the film industry playing drama heavy roles in movies like Shindler’s List, he’s arguably better known today for his roles in uber-violent action films like Taken, Taken 2 and of course, The Lego Movie. That said, it’s likely Liam Neeson’s next handful of movies aren’t going to feature many guns since the actor has somehow managed to piss off a bunch of gun manufacturers enough to have them boycott every single one of his future movies.

Liam Neeson drew the ire of gun manufacturers and people who like guns we guess back in January of 2015 during an interview in the wake of the Charlie Hebdo terrorist attacks in Paris. In that interview, Neeson expressed a great deal of frustration about gun violence in general and how he was sick of having to read about another school shooting every time he opened the morning paper and noted that he felt that the US had too many guns in private hands. This in of itself would be enough to piss off most hardcore Second Amendment enthusiasts, because how dare he express his opinion, but Neeson decided to hammer the point home by referring to the state of gun control in the States as “fucking disgrace”, before adding “America has too many fucking guns”.

Before we get to the backlash, we should point out that Neeson grew up in Northern Ireland during “the troubles”, a time in Irish history where gun violence and violence in general was a depressingly frequent occurrence, so it’s not like Neeson is totally ignorant of the danger guns pose and the damage they can do in large numbers or the wrong hands. It’s also worth nothing that Neeson became a naturalised US citizen in 2009 making it factually wrong and kind of a dick move to dismiss his comments because he’s not an American when, well, he is and he has the paperwork to prove it.

After Neeson’s comments were published, gun manufacturer PARA USA (who provided some of the prop guns for Taken 3) were quick to write a whiny, rambling Facebook post calling for a Hollywood-wide boycott of all things Liam Neeson, because they believed his comments undermined “support of the Second Amendment and American liberties“, despite the fact as a naturalised American citizen he was entitled to voice his opinion thanks to a little thing known as the First Amendment. Which you’ll notice, is one space higher on the list of things the founding fathers wanted to clarify as being a de-facto constitutional right.

Perhaps in an effort to create a black hole of pure irony, gun enthusiasts and presumably just dozens of people wearing shitty baseball caps in their Facebook profile pictures began accusing Neeson of being a hypocrite for using guns in his movies, despite the fact most of his more violent characters don’t fucking need a gun. Seriously,  Bryan Mills dispatches almost every opponent he faces in Taken 1, 2 and 3 with nothing more than a crushing slap to the windpipe and a eye socket shattering elbow, the only time he uses a gun to kill is when someone else pulls one on him and he uses his decades of CIA training to disarm and shoot them. If anything, the film Taken is the perfect example of why you shouldn’t let just any jackass have a gun and why proper training and handling is sort of important.

Besides, Neeson specifically stated in the same interview he was being criticised for that he was fully in the belief that fantasy violence, like in Taken, has no effect on people watching and that it’s the proliferation of guns in real life and how easy they were to access that he thought was a problem. But arguing about that is hard because it relies on formulating a cohesive argument and being prepared to compromise in response to the other person’s point, so instead, angry gun right activists made memes like this …

Because you know, actors can only share the same set of beliefs and values as the characters they play, which is why Mel Gibson is a paragon of racial tolerance like his character in The Patriot.

After filling our comment section with a bunch of racial slurs because we’re taking a sort-of liberal stance on gun control, why not read about how there’s movie footage out there of Liam Neeson punching a wolf to death, but we’re never allowed to see it.