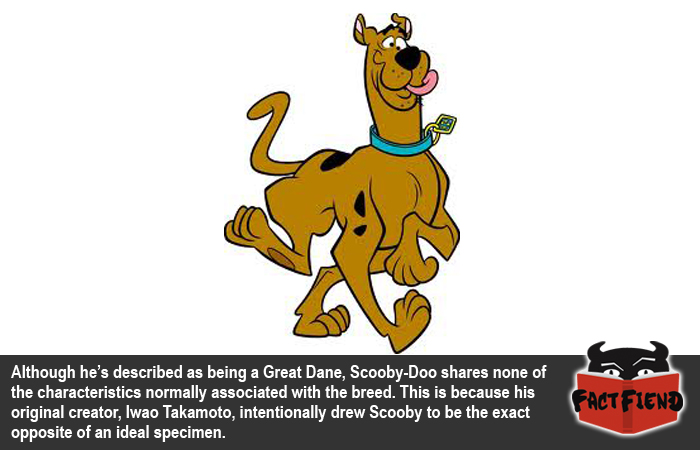 Next to Fang from the Harry Potter series and Marmaduke from Marmaduke, Scooby-Doo is probably the most famous fictional example of a Great Dane. Which is odd because Scooby-Doo himself doesn’t actually embody any of the physical traits that are normally considered desirable in the breed except for probably his ability to speak and walk on two legs.

First things first, because we know someone out there will complain, in the Harry Potter novels, Fang is indeed described as a Boarhound (another, much cooler name for a Great Dane), however in the movies his role was played by a Neapolitan Mastiff which is a sort of melty, bear looking thing.

Moving on to the topic at hand, as noted above, Scooby-Doo typifies exactly none of the stereotypical traits of a Great Dane with the exception of perhaps his great size and friendliness. According to dog experts great dane aficionados, the desirable traits of the breed typically include a straight back, a small chin and exceptionally straight legs, muscular legs. All of which you can see demonstrated here by another fictional Great Dane, Ace. AKA, Batman’s dog.

If that’s what a Great Dane is supposed to look like, you may be wondering why in the fuck Scooby-Doo looks nothing like that? Well, according to the guy who originally designed Scooby-Doo, Iwao Takamoto, all of that is on purpose. You see, when Takamoto was first tasked with designing Scooby and after learning that he was supposed to be a Great Dane (Fun fact: the creator’s of the show toyed with the idea of making Scooby a sheep dog for a while) the first thing he did was speak to a co-worker who just so happened to breed Great Danes on the side.

This co-worked described to Takamoto the ideal Great Dane specimen, which didn’t really fit with the idea of Scooby he had in his head, so he drew the exact opposite of what they’d described. Which is why Scooby is bow-legged with an overly large chin, both of which are traits that would normally be considered unsightly in a regular Great Dane. Hell, according to Takamoto, he was so against drawing Scooby as an idealised version of a Great Dane that he even went as far as drawing him the wrong color presumably just to annoy his co-worker. Which is why Scooby-Doo is a dirty shade of brown with spots, instead of looking like he’s made out of solid fucking gold like a regular Great Dane.