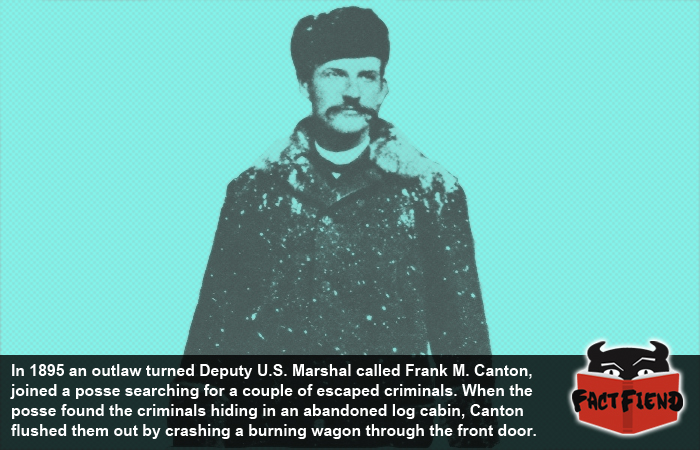 Back in the time of cowboys and guns that only shot 6 bullets, US Marshals were usually the only thing stopping outlaws and other assorted assholes from ruining things for everyone. Amongst Old West marshals Frank M. Canton is one of the more famous because he spent the first half of his life on the other side of the law without anyone realising it.

According to history books with pictures of cowboys on the front, Canton spent his formative years drifting across the American south generally acting like an unrepentant dickhead, robbing banks and rustling the shit out of people’s cattle under the name, Josiah Horner. After shooting a soldier dead during an argument and injuring another, thus completing the trifecta of stereotypical Old West crimes, Horner escaped the custody of a Texas Ranger and moved to Nebraska. After arriving in Nebraska and realising that outlaws in the Old West generally had a shorter lifespan than a suicidal mayfly, Horner renounced his former life as an outlaw and vowed to never commit another crime again.

After adopting the alias, Frank M. Canton, the newly reformed outlaw decided to begin making amends to the people of America by being the most ball-busting enforcer of law possible, signing on to become a Deputy Marshal and accepting a position as sheriff Johnson County in Wyoming. This was in addition to a multitude of other jobs that required Canton to make the lives of criminals as unpleasant and bullet-filled as possible.

During his tenure as the fucking law, Canton was responsible for multiple arrests and became one of the most respect deputies in America, which earned him the scorn of many criminals who of course tried to shoot him. On one occasion, Canton was ambushed on his to dinner by a guy he’d previously arrested, the guy tried to shoot Canton in the back but missed because bullets back then knew better than to mess up Canton’s outfit. 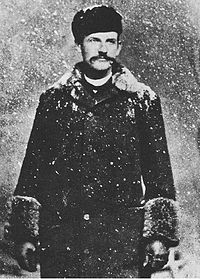 In response, Canton coolly drew his own gun and fired a single shot without missing a step, killing his would-be assassin instantly and in the most badass way possible.

On another, more awesome occasion, Canton joined up with a posse who were tracking a two criminals who’d recently escaped from a Pawnee jail. Realising the Old West version of Robocop was tracking them, the two criminals blockaded themselves in a big-ass cabin and began taking pot shots at Canton and the rest of his posse, hitting and injuring at least one of them. Unwilling to wait for criminals to run out of bullets or for one of his companions to grow a pair and dive through the window firing two guns at once, Canton strode towards a nearby wagon, set it aflame and pushed it down the hill leading to the cabin. After the flaming justice wagon smashed through the front door of the cabin, Canton and his posse shot the criminals to death with every bullet they had and possibly some they found on the ground.

But here’s the best part, after 2 decades of dispensing law with an almost cyborg level of lethal efficiency, Canton visited the governor of Texas to confess to all of the crimes he’d committed as Josiah Horner. The governor, who was as astounded as anybody that one of the state’s most trusted and well-known deputy marshals was actually a criminal, pardoned Canton for the years of his life he’d dedicated to serving the law.

For more surprising facts about badass enforcers of the law, why not read our article about how nobody originally knew what race Judge Dredd was supposed to be?