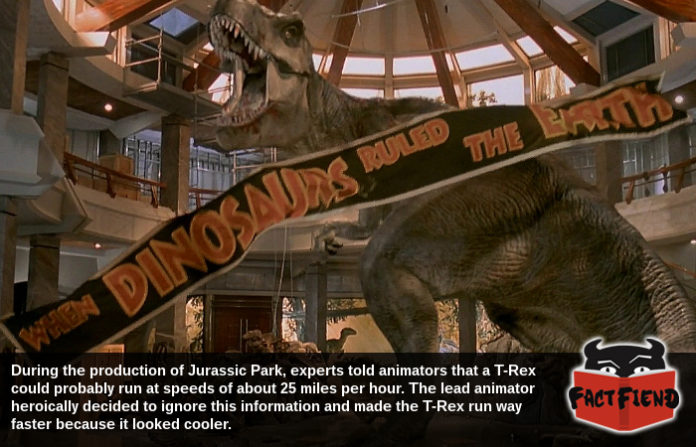 There’s a scene in Jurassic Park where a big ol’ T-Rex chases after and keeps pace with a Jeep, something it could never have actually done in real life. Not that the animators cared, because they were more concerned with make the T-Rex look as badass as possible.

According to the ruby faced Santa Clause looking motherfucker who funded Jurassic Park, John Hammond the T-Rex seen in the film can run at speeds in excess of 32 MPH.

However, later in the film an adult T-Rex is shown as being fast enough to, for a short while, keep pace with a speeding Jeep. Though the speedometer is never actually shown during this scene, with the only suggestion of how quickly they’re going being provided by Jeff Goldblum, who only comments that they “must go faster” …

Given that the Jeep Wrangler can reach 60MPH in as little as 8 seconds and the T-Rex keeps pace with it during the scene for about 30 seconds, it’s safe to assume that Hammond was a little off in his estimation of how fast 20 tons of prehistoric murder could run, is a little off.

In fact, according to lead animator, Steve Williams, he admitted that for that particular scene, he “threw physics out of the window“ for the sake of making the T-Rex look, to paraphrase him, like the raddest shit ever.

Specifically for the that one scene he animated the T-Rex so that it was running at speeds in excess of 60MPH because a 20 ton lizard with a mouth full of knives needs to be able to do that to be scary apparently. This is despite the fact that he had it on fairly good authority from dinosaur nerds of the time that the T-Rex could probably only run at the speed Hammond quoted earlier (32MPH) at most. Today the scientific consensus is that a T-Rex’s cruising speed was much lower than this and that realistically, you could probably out run one on foot.

Williams, chose to ignore this information for the sake of a cool scene, noting in an interview that if a creature as massive as the T-Rex actually moved as fast as he programmed it to, it’s bones would have detonated due to the force being exerted. We don’t know about you, but we think that scene would have been way scarier if the T-Rex fucking exploded as it caught up to the jeep and headbutted it, but we’re guessing that would have been harder to animate.