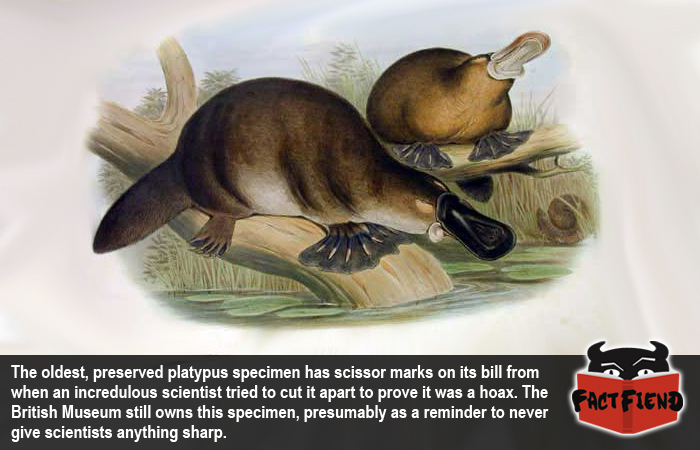 The platypus, AKA, God’s little mistake is one of the only a few mammals on Earth known to lay eggs, however most people find it weird not because it lays eggs, but because it looks like a beaver someone hastily glued a duck bill to. Weirdly enough, when scientists first got their hands on a platypus corpse, they didn’t actually believe it was real precisely for that reason, in fact they almost cut apart the very first stuffed specimen just to prove it.

Even though the Aborigine people have known about the platypus for hundreds of years, our story takes place when the white man came into contact with one in 1797, because of course it does. The white man in question was one, Captain John Hunter, who, upon seeing the strange and fuzzy beast man had never encountered before, immediately and heroically shot it to death and skinned it. For science.

Satisfied that his stuffed and still rather fuzzy quarry no longer posed a threat to either his throat or his masculinity, Hunter then had the strange creature sent back to London’s British Museum with a note reading “I heard you egg heads love this kind of shit”. Probably.

When the stuffed platypus landed on the desk of George Shaw, Shaw took one look at the adorable abomination in front of him and immediately dismissed it as a hoax, we’d like to point out that this is despite the fact that it had been sent to him by a governor and not some random asshole. Shaw was so sure that the platypus specimen was fake that he immediately began trying to hack it apart with a pair of scissors he had lying around, insisting that the creature’s bill was sewn on.

After discerning that no, the odd creature from a far away land a governor had sent him to classify wasn’t an elaborate fake, Shaw decided that he was the only person qualified to name the beast he’d literally just tried to cut apart and called a hoax. Really, British Museum, you couldn’t pass this duty on to like, another scientist on staff, maybe one who didn’t just try to cut apart the only platypus specimen in existence with a rusty pair of scissors?

But we digress, Shaw decided to call the strange new mammal, “Platypus Anatinus” which roughly means flat-footed and bird-like, even though the platypus doesn’t have flat feet at all, Jesus, Shaw, did you get anything right when it came to writing about this thing?