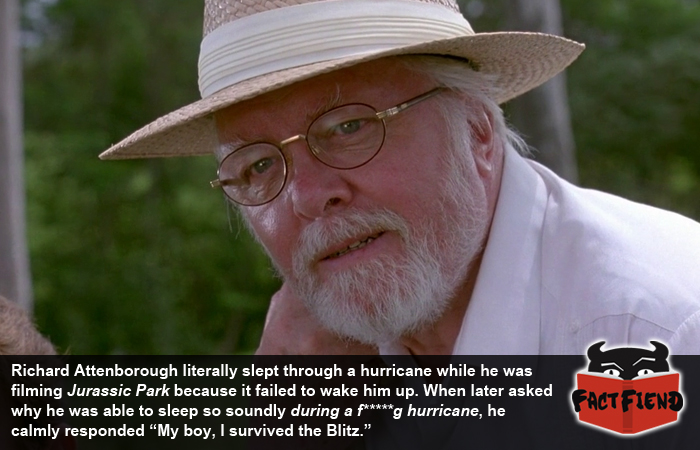 Richard Attenborough is (rightly) known for two roles, John Hammond in Jurassic Park and Father frickin’ Christmas in Miracle on 34th Street. Contrary to the doddering, grandfatherly figure he often played in movies, Attenborough was actually pretty badass, as evidenced by the fact he once slept through an actual hurricane.

Just to be clear here, Attenborough didn’t sleep through some pansy-ass category 1 hurricane, he slept through Hurricane Iniki, aka one of the most powerful hurricanes to ever hit the island of Hawaii, ever! According to the cast and crew of Jurassic Park, Attenborough straight up slept through the bulk of the category 4 hurricane while they were huddled in their hotel’s ballroom like cowards.

When Attenborough finally woke up, a dumbfounded member of the crew asked him how on Earth he slept so soundly through something that was literally uprooting trees and throwing them 80 feet through the air, he smiled and calmly explained that he’d lived through the Blitz. A time in British history where millions of bombs were dropped on the UK in a sustained effort by the German’s to level the country like they were playing Sim City on easy mode.

Attenborough, like many Brits, gave a negative amount of fucks about the constant looming threat of death by explosion and according to him, during the 40’s he was caught in the middle of so many bombing runs that he eventually just stopped giving a shit because he didn’t want to let them interfere with his day-to-day life. Attenborough was so indifferent to the threat of being killed by a falling bomb that when one went off during his wedding, he finished his vows before begrudgingly walking to a nearby bomb shelter.

The next time you watch Jurassic Park and see that kindly old man with the wispy white beard calmly explain that he cloned an entire full of dinosaurs, remember that before he filmed that scene he might have just slept through a category 4 hurricane. Then turn up the volume so you can hear the awesome theme song.