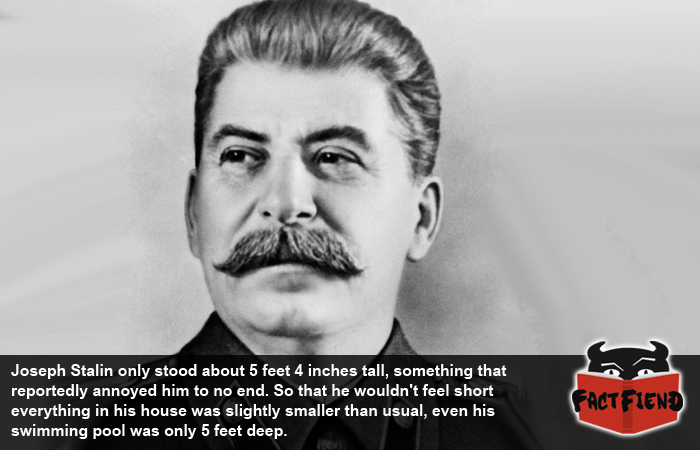 Few names are as synonymous with evil and generally being a massive dickhead than Joseph Stalin, while he’s not as well known for his crimes against humanity as say, Hitler, he is, as many internet commenters seem oddly keen to point out, responsible for more deaths. So we think it’s only fair we make fun of him for being short.

Stalin’s exact height is difficult to pin down because the dicktator (that’s not a spelling mistake) had any painter or sculptor who depicted him as anything less than a hulking man-mountain who could crush a man’s head like a sparrow’s egg, shot. As such, all we have to go on are estimates drawn from photos and reports from people who met him, from which we’re able to gather that the diminutive despot was between 5 feet 4 – 6 inches tall.

Stalin’s squat, Peter Dinklage-esque frame reportedly caused the tiny tyrant to develop an ironically huge small-man complex and he tried his absolute damnedest to ensure that to everyone but the few people he actually had to sit in the same room as on a daily basis though that he was a freaking giant opposed to the pint-sized prima donna he actually was. One of the ways Stalin accomplished this was, as mentioned, to shoot every person who pictured him in an unflattering light which is why almost every image we have of Stalin from his time in power makes him look like he’s seconds away from firing fucking lasers from his eyes.

Stalin would also refuse to stand next to taller members of his entourage and would often request that he only be photographed from below so that he’d look more physically imposing and Godzilla-like.  Since Stalin was well, fucking Stalin these requests were of course followed to the letter and to the world at large, Stalin appeared to be a man of gargantuan proportions.

Stalin’s tendency to have anyone who made a crack about him so short he had to reach up to tie his shoes killed was so well known that the people building his house went out of their way to make all of his furniture ever so slightly smaller than usual so as to not incur his wrath. Virtually everything in Stalin’s home from the stairs to the door frames were made with his stature in mind so much so that the deep end of his personal swimming pool was only 5 feet so that he could stand up straight in it without getting his moustache wet. Which to be fair, would be a crime in of itself because that was one fantastic looking moustache.

Hell even the billiards table in Stalin’s personal game room was just smaller than regulation size so that he didn’t have to stand on one leg to reach across the table, regardless of how pimp that makes you look if you can pull it off. What makes this more hilarious is that Stalin was supposedly just the tits at billiards, which probably has nothing to do with the fact that Stalin was the kind of person who’d have people shot in the face for making him feel inadequate. It also probably has nothing to do with the fact that Stalin played the game using a specially weighted cue to make his shots more powerful on a table literally built to accommodate his dainty, child-like frame.

So the next time you feel sad, just remember that Stalin, one of the most powerful and evil men in all of human history, lived in a house full of adorable tiny furniture that he had to have specially built.