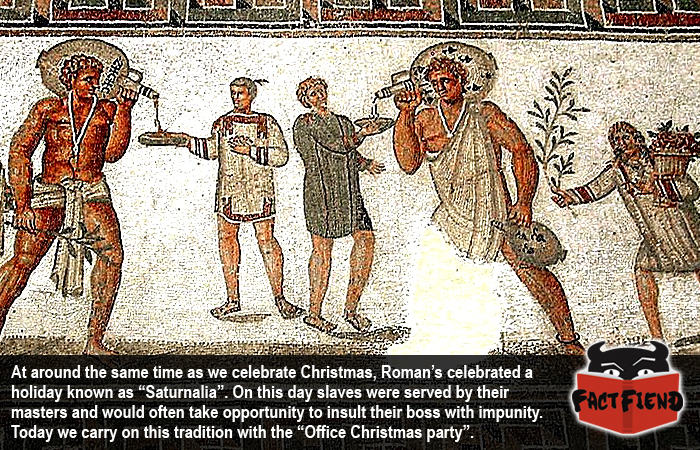 Though not exactly the same as Christmas per se, Saturnalia was a holiday celebrated by Roman’s at around exactly the same time that involved giving gifts, so we think it’s okay to include it as part of our Christmas fact bonanza (we went there). The main difference between Saturnalia and Christmas was that it traditionally involved the reversal of roles.

Which wasn’t as kinky as you’d think.

Saturnalia which is officially celebrated on December 17th, was originally just a single day on the Roman calendar, but it proved so popular that it ended up being celebrated for an entire week. Like Christmas it was usually customary for people to celebrate with copious amounts of food, drink, partying and sex with Karen from the office.

As you’ve probably guessed, it was meant to be in celebration of the Roman God, Saturn, the God of wealth, agriculture and pretty much everything great about the world. Along with eating themselves silly, the Roman’s also gave each other gifts during Saturnalia and a ban on gambling was lifted for the duration of the holiday. In other words it was exactly like Christmas, only better because you got an entire week off and were required by your God to party like your liver was made of titanium.

By far the best part of Saturnalia (for the slaves) was the reversal of roles, and during the week of celebration it was expected that masters served their slaves instead of it being the other way around, children’s roles were also reversed for the holiday so instead of having to be quiet and respectful, they could be loud and annoying, just like their parents. So during Saturnalia, children and slaves were seated first and they were served by their parents and masters. Even better, social norms were dropped during the holiday and slaves were not only served by their masters, but they were allowed to, if they so chose, insult the living shit out of them and even slap them around without reprieve.

In other words, for about 1 week per year Roman slaves had free rein to do whatever they damn well pleased without consequence and children could slap their parents across the face. Then, on top of that, they’d get a bunch of presents and drunk off their ass to boot. So remember everyone, if you get drunk and call your boss a fart-weasel at this years office Christmas party, just tell him you were celebrating Saturnalia and that you won’t have a fart-weasel discriminate against your beliefs.