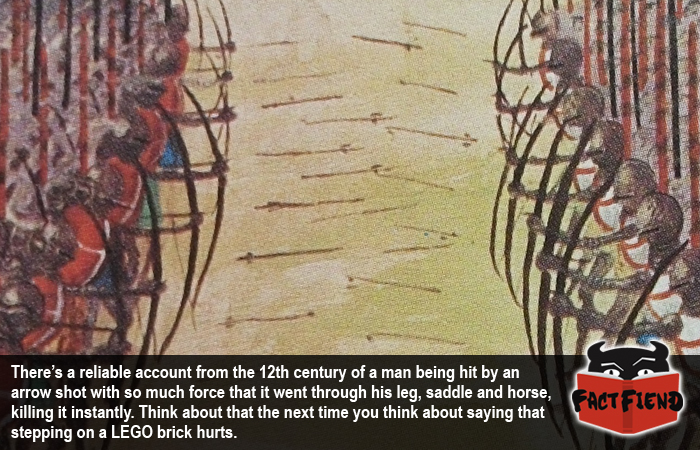 As a great man once said, there’s no animal on Earth that won’t die if you just keep punching it, that said, some animals are decidedly harder to kill than others, like horses. Those things are pretty buff,  so then it’s pretty impressive that a guy once managed to kill one, through its own rider.

Longbows were the sniper rifles of the middle ages, they could comfortably and accurately kill a man from hundreds of feet away without him ever once being able to see it coming. Which amongst other things, is really unsportsmanlike. However, what made them truly terrifying though was their power. There are stories, myths and legends about arrows shot from longbows punching through plate armor, pinning people to the ground and even hitting them right in the penis. Very few, if any, reliable sources exist to confirm such stories though. Except for one.

A testimony by a 12th century clergyman called Gerald of Wales, is by far one of the most reliable and harrowing examples of the power of the longbow. According to Gerald, an incredibly unlucky soldier was pinned to his horse after an arrow went straight through his thigh and groin, but the arrow wasn’t done there. After splitting apart the soldiers thigh bone, the arrow still had enough kinetic energy to puncture its way through the guy’s entire horse, killing it instantly.

Yes, along with having enough force to push its way through the guy’s armor, padding, thigh muscle, bone and dignity, it had enough force left over to kill his horse and ruin his saddle to boot. And now you know why Daryl from the Walking Dead favours arrows over bullets, one day he’d going to have to fight a zombie horse and on that day he’s going to look like such a pimp.