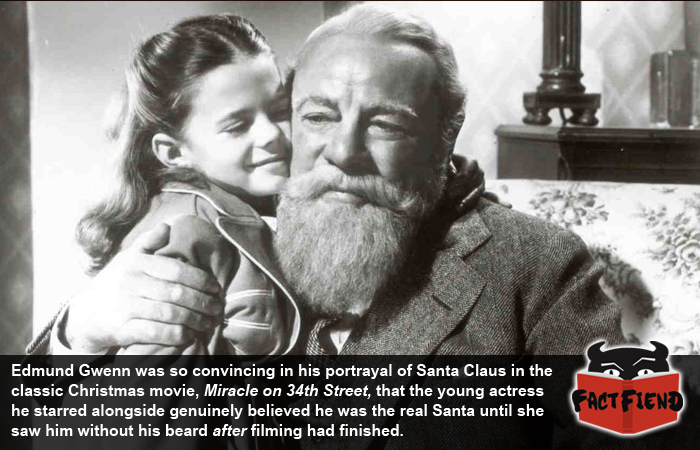 It’s pretty safe to say that if you haven’t seen the original Miracle on 34th Street movie or the subsequent 1994 remake, you’ve missed out on a huge cultural milestone that has shown generations of children the meaning of Christmas and also how dope Richard Attenborough’s beard is. Few people realise though, just how much the actor to playing Santa in the original version of the film owned the role.

If you’re not familiar with either version of the film, in the 1994 remake Santa was played by the utter pimp that was Richard Attenborough whereas in the original 1947 version he was played by Edmund Gwenn. The film itself follows the story of a man calling himself Kris Kringle (yes, really) who applies to be a mall Santa and ends up kicking all of the ass at it, even managing to use his kindly old man charm and bitchin’ beard to convince a young girl to believe in Santa again.

The film takes a strange turn when it emerges that the man calling himself Kris Kringle is under the delusion that he is in fact the real Santa, which is obviously bullshit because that honor belongs to Jonathan Meath. The film culminates in Kris Kringle, an elderly man who believes he is a fictional entity who breaks into people’s homes once a year, being allowed to continue being near children by a judge because he does kind of look like Santa.

Which is brilliant because during the entire time Gwenn was on set, the little girl he was asked to star alongside (Natalie Wood) genuinely thought he was the real deal. Something she believed right up until filming wrapped and she saw Gwenn without his costume and bushy facial fuzz, only then did she realise she’d spent 6 months working with an actor and not the literal personification of good cheer. You know, because kids are idiots.

So, just to recap in case you’re not fully appreciating how utterly brilliant this is, Edmund Gwenn was mistaken for Santa while playing a character who thinks he is Santa because he looked like Santa.

And people say Inception was a movie that blows your mind.