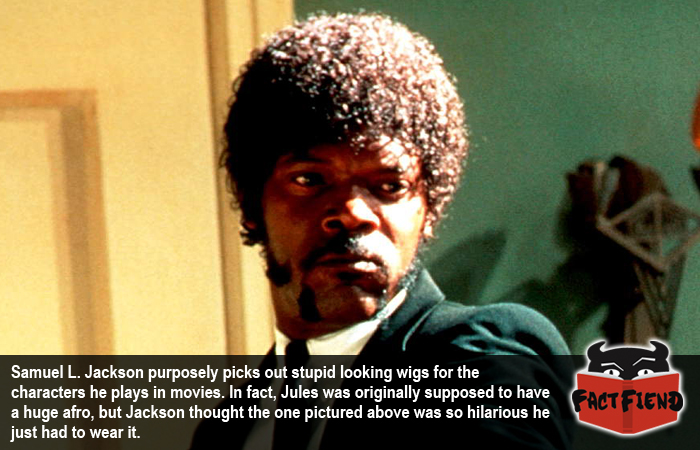 Samuel L. Jackson is known as one of the world’s most powerful and versatile actors, he’s also as bald as shaved billiard ball. So when he chooses an acting role, one of the things that sways him is how badass he gets to be and whether he’ll get to pick the look (read: wig) of his character.

Samuel L. Jackson (we’ll never not type out his full name, get used to it) has stated in interviews that he’s usually the one who picks out his character’s hairstyle and that more often than not, he’ll pick a stupid looking one just because it’s funny. On the rare occasion he doesn’t pick out his own look, he almost always has some level of control over it, because he’s Samuel L. Jackson.

For example, when he was given the role of Jules in Pulp Fiction, Samuel L. Jackson took one look at the hilariously terrible Jheri curl wig a stage hand had picked up by mistake and instantly fell in love with it. Originally Tarantino had pictured Jules with an afro, however, Samuel L. Jackson, upon seeing the wig, immediately placed it on his his head and said “this is Jules”. Since arguing with Samuel L. Jackson is like arguing with a shark made of knives only with a higher risk of being hurt, no one tried to take it off him and the look stuck.

With that terrible Jumper movie everyone had forgotten about until just now when we mentioned it, Samuel L. Jackson’s main thought about his role was that he’d never played a character with white hair before. So when the time to give his character a hairstyle, the hair and make-up people followed Samuel L. Jackson’s advice and Roland Cox (as if any of you knew his characters name) was given a haircut that looked like it was drawn on in marker and a jet black goatee beard combo because Samuel L. Jackson does whatever the hell he damn well wants.