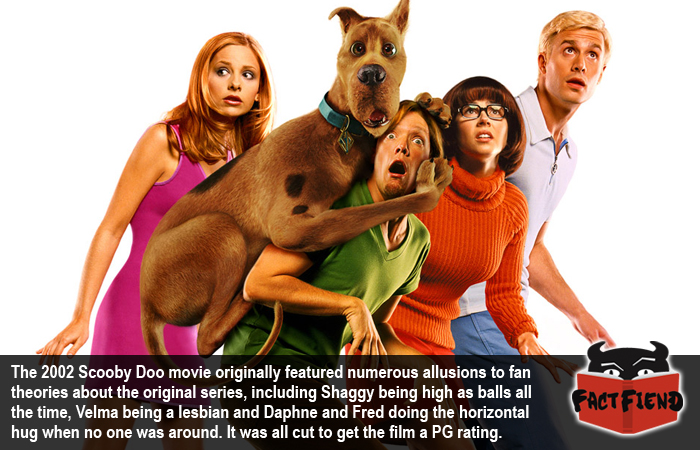 If you’ve never watched Scooby-Doo, you can stop reading this entry, close your browser and silently weep, if people are around, don’t worry, they’ll understand because they watched Scooby-Doo as children. For everyone else, did you know the 2002 live action movie cut like a bunch of really awesome jokes.

If you ever watched the original series you’re likely aware that there were a ton of fan theories and jokes about the various characters. For example a popular theory was that Shaggy’s lazy gait, constant desire for food and the fact his best friend was a giant talking dog, had many fans speculate that he was simply tripping balls every second he was on screen. In an early cut, the 2002 film had a bunch allusions to this theory, however the only thing that was left over when the movie was released was a scene in which you saw smoke rising from the top of the Mystery Machine while you heard Shaggy’s voice say “Talk about toasted!”. Only for it to quickly cut to Shaggy cooking a steak on a grill inexplicably located inside the Mystery Machine. If that’s what they left in the movie, imagine what they cut out?

Other scenes that were cut involved a candid shot of Fred lusting over Daphne only for him to catch a glimpse of Velma doing exactly the same thing. Alluding to that fact many fans thought that Fred was constantly pairing himself with Daphne to explore her haunted castle and that Velma was like, super gay.

The film even featured a kiss between Velma and Daphne, played for laughs of course, that was again, cut to keep the film’s family friendly tone. Yes, thanks to some dumbass Hollywood executive, we as an audience missed out on Sarah Michelle Gellar kissing Linda Cardellini while a giant talking dog ran across the screen. Then again, that was probably for the best since they’d probably have to cancel the Oscars after that since they’d obviously run out of awards to give after that scene.

The actors playing each respective role, all agreed that the scenes were fun, but that cutting them was for the best to keep Scooby-Doo a family friendly film, we’d like to disagree since a movie with all those jokes would have obviously been amazing.

We’re linking to the DVD purely for the hilariously elitist reviews by people who clearly thought they were actually buying Schindler’s List.