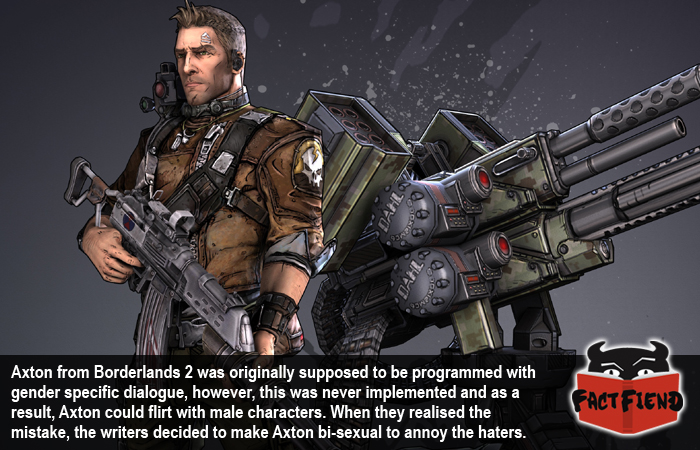 Fun fact: Axton, AKA, that one character from Borderlands 2 who isn’t the cool ninja with a sword, is one of the few characters in recent gaming history to be openly bisexual, and part of the reason why is due to a a genuine error made while programming the game.

You see, early in development, the lead writer of Borderlands 2, Anthony Burch, wrote gender specific dialogue for each of the game’s 4 playable characters. The aim was for each character to have specific lines when they were reviving another character after being shot, Axton for example was supposed to have a small chance of flirting with the (at the time) lone female character you could play as when he tried help them while they were bleeding out. Because as well know, the absolute best time to pick up a girl is when she’s lying on the floor with a bullet wound in her abdomen.

Now for one reason or another, gender specific dialogue option was never programmed into the game, Axton’s gender specific dialogue however, was. This resulted in a small chance for Axton to flirtatious ask any of the eventual 6 playable characters in the game, including a clone of himself and a fresh out of high school teenage girl, if they “worked out” when he tried to revive them. This led to many fans assuming that Axton was supposed to be bi-sexual.

According to Burch though, this was purely an oversight and it was never intended for Axton to be anything other than a guy who just really liked shooting people in the face with increasingly hilarious looking guns. When he dropped this bit of information in the Borderlands 2 forums and saw that fans were disappointed that Axton wasn’t intentionally written as being bi-sexual, he had a revelation. Why the fuck couldn’t Axton be a bi-sexual? It’s not like Axton’s sexuality had any impact on the story.

With this in mind, Burch got in contact with Axton’s voice actor and had him record new dialogue for the character to make his bisexuality a little more obvious and then went ahead and made this facet of his character official in terms of canon. Of course after this was announced Burch got a ton of hate-mail from a fans who didn’t like that they’d been tricked into playing through the game as a bi-sexual character, seemingly oblivious to the fact that the not noticing or caring about Axton’s sexuality was supposed to be the fucking point. But hey, the kind of people who complain about that sort of thing tend to be dickheads anyway, so we can’t really be surprised that they got freaked out when a guy who likes having sex with men and women was in their game about shooting giant robots with exploding laser guns.

Unperturbed by the complaints of whiny piss-baby man-children, Burch doubled down and made sure everyone knew that he’d intentionally filled the world of Borderlands 2 with gay and bi-sexual characters purely because he wanted a game full of diverse characters representative of every walk of life and also because why the fuck not? Being gay doesn’t mean you can’t be a badass, hell, the arguably two of the coolest (and most popular) characters in the entire game, Sir Hammerlock, a gentlemen hunter with a robot arm and Mister Torgue a muscle-bound, board game loving gun nut who tasks you with blowing up the entire ocean are openly gay and bisexual respectively.

So just keep in mind the next time you pick up a video game with yet another, straight, white, male protagonist on the cover, Borderlands 2 features an equally as white and male protagonist who also likes dudes, and he’s arguably way cooler because he can summon a turret that fires lasers from nowhere. That ladies and gentlemen, is progress. Slow progress, but progress all the same.