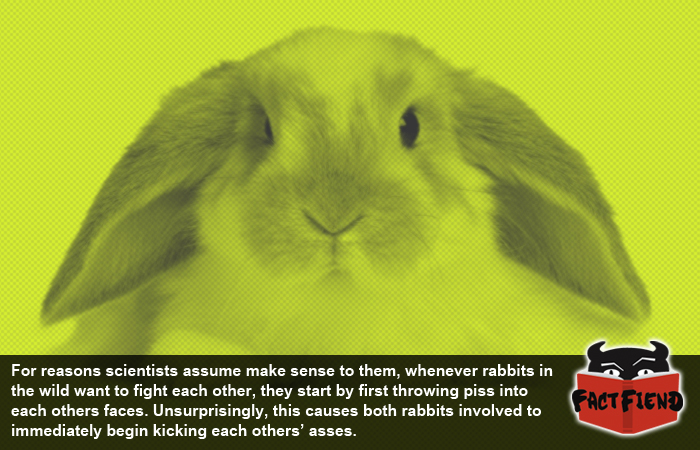 Here on Factfiend, rabbits will always consistently score a 9/10 on our fuzziness chart regardless of whatever horrifying truths we learn about them, they’re just that fuzzy. However, even our love of the bunnies was tested when we learned how they fight each other.

Despite their reputation as docile, easy-going, reasonably chill animals that are just as happy nuzzling a young child as they are exploding into existence from the inside of a magician’s hat. Rabbits, in their natural habitat are more like a cross between that killer rabbit from that one Monty Python movie and Bugs Bunny when he really has a hard on for ruining Elmer Fudd’s day.

In the wild rabbits are known as being fiercely competitive. To explain, you’ve probably heard of the phrase “breeding like rabbits”, well in a the rabbit social hierarchy, the only rabbit who gets to get his freak on is the dominant male. As you can imagine if you ever saw Bugs Bunny dress like a girl, this is a position rabbits will fight tooth, nail and adorably fluffy tail for. Rabbits have been known to straight up kill each other in these fights using their massively powerful back legs to kick other rabbits’ ribcages to dust before rubbing their dicks all over every female in the vicinity.

When a rabbit wishes to challenge another male, though, like with humans there are dozens of subtle social cues a rabbit could take advantage of to attract an opposing males attention. Most rabbits go for the tried and true method of throwing piss into a rival’s face. Which, in the list of things a person will take notice of ranks pretty highly and falls somewhere alongside punching them in the dick wearing a hockey mask and slapping their newborn out of their hand.

Since rabbits use urine to mark their territory and because throwing piss in someone’s face is a seriously bogus move, the most common reaction to this tactic is instant physical retaliation, in which a dominant male will likely be crowned. Although we can’t imagine many females will want to get it on with the rabbit who stinks of piss, we don’t know enough about rabbit sex to make that call. So instead we’ll just say wild rabbits will probably get an 8/10 from now on on principle.

For more animal hilarity, why not read about how emus have been observed in the wild walking up behind people just to gently poke them with their beak before running away.