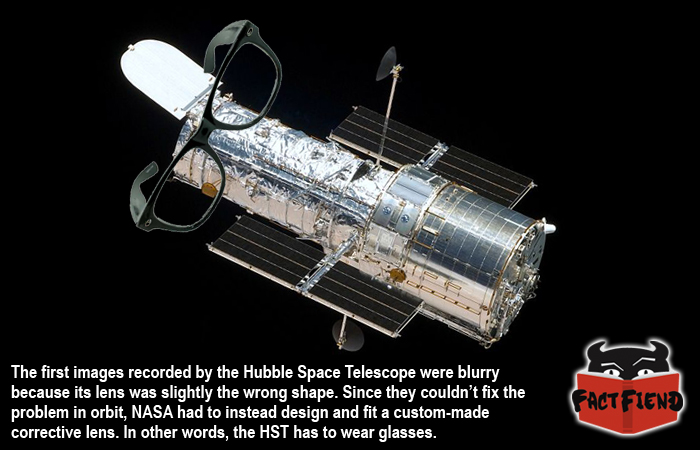 The Hubble Space Telescope is humanities version of the Eye of Sauron, a giant, all-seeing middle finger pointed directly at God’s bathroom. Oh, and it wears corrective glasses.

We’re not using that term for comedic effect or to avoid typing the big-ass word NASA used, the HST effective wears corrective lenses because without them, it can’t see shit. Seriously, this is what pictures taken by the HST looked like just after it NASA launched it into orbit. 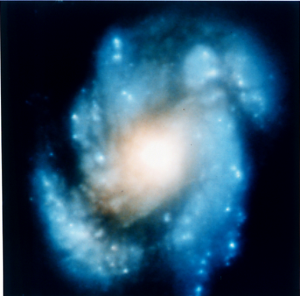 While looking at that image keep in mind that the HST cost millions of dollars, we’re pretty sure that people have strapped cameras to balloons and taken clearer pictures of the cosmos than that. Now this is the same image taken by the same telescope a few days after it was given the biggest, most fabulous pair of glasses since Elton John celebrated not getting laser eye surgery. 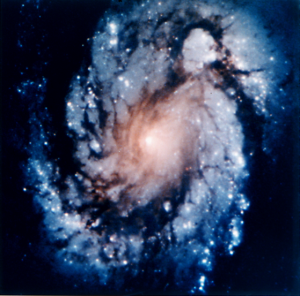 Look at how much clearer that image is, it’s like someone poured liquid crystal through a charcoal filter and strapped it to the front of a Japanese tourist’s camera. So how did scientists manage to pull this off? Well first we should explain how they messed things up in the first place.

According to most sources, the lens and mirror inside the HST were supposed to be ground to a ridiculously accurate degree. However, this didn’t exactly go to plan due to a combination of the people tasked with creating the optics for the telescope not doing their damn jobs and NASA not bothering to test their work before launching the result into space at the expense of the tax payer.

In fact, nobody noticed that the outer edge of the the mirror inside the telescope was ground 4 microns too flat, we’d forgive a normal person for not noticing that, but this was NASA, if we expect anyone to give a crap about something that stupid and inconsequential, it’s the people with all the giant microscopes.

It wasn’t until the HST was in space that it became apparent that someone, somewhere had made a huge mistake and seeing as the telescope was currently in space, fixing it was going to cost millions. Since replacing the mirror was out of the question and bringing it back to Earth was just as stupid a suggestion, it was decided instead that they’d correct the mistake the same way we correct people’s vision. With a corrective lens.

Though the image you currently have in your mind of the HST wearing a giant pair of novelty glasses isn’t accurate, the basic premise behind how NASA planned to fix the HST’s shitty vision was the same as the way an optometrist would fix ours. With a corrective lens that essentially reversed the mistake.

In other words, the Hubble Space Telescope actually wears a pair of the most expensive corrective lenses ever designed. Whether or not they’d coated in gold isn’t clear, so we’ll just say they are because we can.