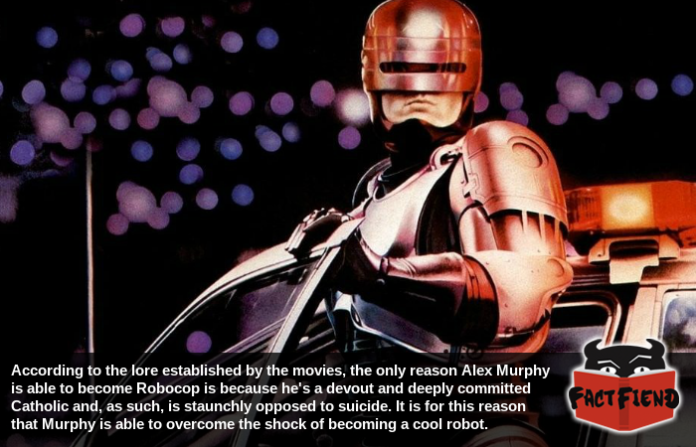 Within the context of the universe he exists in, Robocop is an unkillable cybernetically  enhanced badass with an unflinching devotion to the law, protecting the innocent and uppercutting criminals through plate glass windows. Something he is apparently only able to do thanks to perhaps his best and yet least well known ability, his super-Catholicism.

To explain, in the Robocop Extended Universe, Robocop (contrary to what his name suggests) isn’t a robot, but the remains of former Detroit Police Officer called Alex Murphy that have been reanimated via cybernetic enhancement. In fact, it’s noted in several pieces of Robocop media that Murphy was so extensively enhanced that if you laid out the pieces of him left, there wouldn’t be enough to constitute a corpse.

In fact, so little is left of Murphy that a key plot-point of Robocop media is whether or not Alex Murphy is even still alive and the character himself is constantly wrestling with whether he’s a man, a machine or something in between. Hell, the final line of original Robocop movie is Robocop, the character, asking someone to call him Murphy as a nod to the fact he’s finally realised the answer to this question. 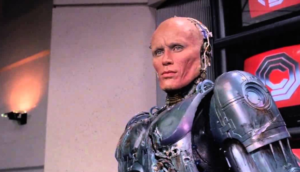 The thing is, in-universe, nobody is able to figure out why exactly Murphy is able to so easily come to terms with his new found robo-mortality since, everyone else they try to turn into a cool-ass robot immediately attempts to commit suicide.

Well this, as it turns out, is the whole reason that Murphy is the only apparent exception to this rule. It would be against his religion to end his new found robo-life and as a result, he just deals with it.

You see, Murphy is noted in several pieces of Robocop media as being a devout Catholic, so devout in fact that he simply cannot bring himself to commit the most heinous mortal sin in the eyes of the Catholic church, suicide. Hell, in the second film one character even comments on the fact that the only thing that probably kept Murphy alive was his Catholic upbringing and sense of duty not allowing something as trivial as being shot 180 times in the face and resurrected as a cyborg keep him down.

Because of this, Murphy not only comes to terms with being a bunch of organs held together with future technology, but embraces it, allowing him to become the badass sentinel of robo-justice we all know and love.