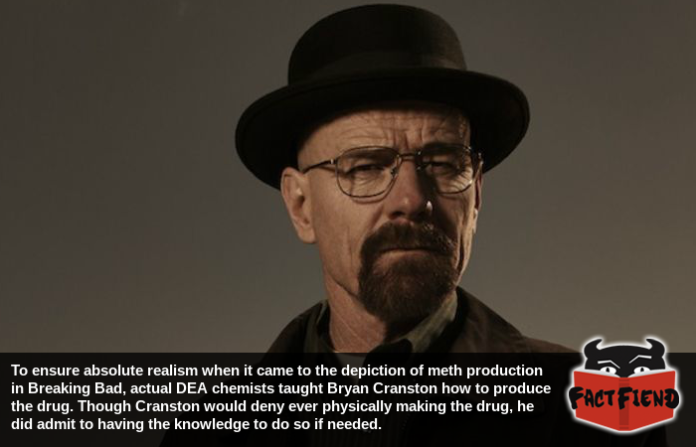 Bryan Cranston is an actor so skilled he can make you root, and feel sorry, for Walter White, a megalomaniacal drug king pin who yells at his wife and has a really shitty taste in hats. A noted method actor, Cranston’s dedication to portraying White was such that he actually learned how to manufacture methamphetamine.

As you might imagine cooking up a batch of meth is pretty difficult and the exact process to make it isn’t exactly something those who know how to do it would readily admit to, what with it being illegal and all. This posed a problem for Breaking Bad creator Vince Gilligan, a noted stickler for getting details just right. Especially when you consider that a key plot point of the show is that the meth produced by Walter White is of such exceptionally high quality everybody wants a piece.

Luckily a solution came in the form of the Drug Enforcement Agency who were inexplicably okay with lending their expertise on meth production to the show in the form of chemists who work for the agency. According to Gilligan these chemists sat in on filming for the first few episodes and went over every detail of how meth is made with both the cast and crew to ensure the realism of the show was maintained.

Perhaps nobody was given more instruction on the intricacies of cooking meth though than Bryan Cranston who was taught by those same chemists how exactly the drug is made so that he could convincingly portray an expert on the subject. While Cranston refused to divulge whether or not he actually made any meth, it’s safe to say he probably could have given what happened when the show aired. 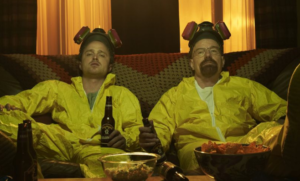 You see, when the show became the biggest thing on TV Gilligan and his team began receiving a lot of letters from actual meth addicts and dealers on the accuracy of everything from the jargon used to the sets. The latter point being echoed by actual fucking DEA agents who, according to Gilligan, would routinely visit the set in both a professional and personal capacity and marvel at how the prop drug labs used on the show looked exactly like ones they’d busted.

Gilligan of course took this as a compliment and noted in interviews about the subject that while it was nice to know that the show was realistic in its portrayal of the meth business, he at least hoped the letters from those involved with it had since left it behind. Which is, fair.