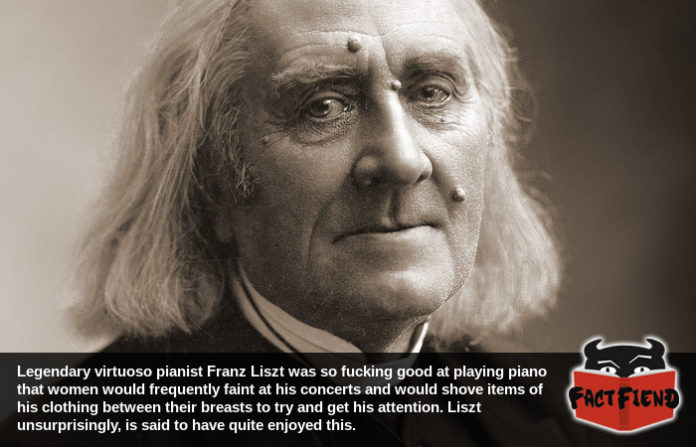 Franz Liszt was a legendary pianist of such prodigious skill that the mere sight of his flowing, power metal mane whooshing in the breeze as his fingers danced along his piano could cause women to spontaneously swoon and presumably orgasm just all over. A fact that infinitely confused both the pianist and his friends.

It’s worth noting that around the time Liszt performed the idea of audiences being whipped into a berserker-like frenzy was unheard and many of the pianist’s contemporaries were baffled at the effect his piano-playing ability had on crowds. Reports from the time tell of women enraptured by Liszt’s skill engaging in bouts of physical violence to get closer to the stage during his performances and skulking around after he’d finished playing so that they could sweep the stage for buttons that fell of his coat or some shit.

While nobody is really quite sure why exactly Liszt had such an effect on crowds and women, a leading theory is that he was simply so fucking good at playing piano that women simply couldn’t contain themselves around him. It probably also didn’t hurt that Liszt was one handsome motherfucker in his prime. 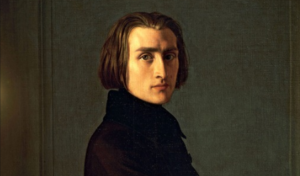 A key aspect of Liszt’s playing style that differentiated him from other, lesser virtuoso pianists was that he seemed to greatly enjoy playing to the crowd and was well-known for his ability to improvise. For example Liszt’s would often add flourishes to already difficult-to-play pieces composed by his contemporaries and peers for no other reason than to show off how good he was. Likewise, Liszt would frequently play pieces at double their normal speed or with one hand as a demonstration of his skill, usually while whipping his luscious man-locks back and forth like a lion listening to Metallica.

A secondary factor that is said to have led to crowds becoming almost dangerously enthusiastic during Liszt concerts was the pianist’s expansive repertoire. Something that when combined with Liszt’s penchant for improvising saw no two Liszt concerts being the same and led to dedicated fans coming back night after night just to see what crazy bullshit he’d do next.

Ever keen to play to the crowd, Liszt took to doing more and more outrageous things during concerts, eventually culminating in the pianist throwing his gloves and handkerchiefs to the crowd while playing and tuning his piano specifically so that strings would break during performances so that he could improvise around it. Speaking of broken strings, Liszt’s style of playing was so aggressive that he’d literally destroy pianos by playing them so hard, at which point a fresh one would be brought out so that he could continue playing. In other words, Liszt was intentional breaking instruments long before it was cool. So yeah, eat shit, The Clash.

Female fans of the pianist, as noted above, totally ate this up and would swarm the stage while he was playing throwing articles of clothing at him in the hopes he’d take notice and perhaps engage in a bout of vigorous 19th century intercourse with their vagina. Meaning yes, in addition to being the first known person to intentionally destroy his instrument mid-concert Liszt also popularised the idea of female fans throwing panties onto the stage. Shit, it’s no wonder people unironically refer to this guy as the first rock star.