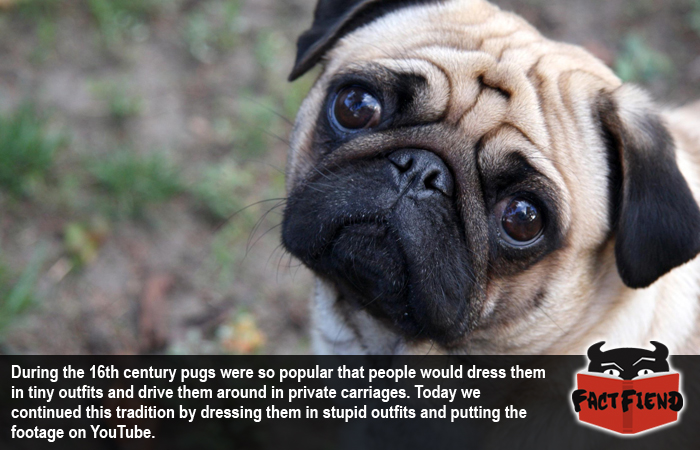 The internet currently has quite a hard-on for pugs, considering that the modern day pug is an unhealthy, overweight shell of what its species is supposed to represent, that kind of makes sense. Go back a few hundreds years or so and you’d find that not only were pugs way different to how they are today, but that people loved them just as much, if not more.

First things first for everyone who doesn’t have any idea what we’re talking about, this is what pugs used to look like before we inbred the shit out of them to make them look “cute”.

That’s a picture, aptly titled “A favourite pug” was painted around 1802 and it shows just how much the pug as a breed has changed since we humans started sticking our nose into their sex lives. If you think we’re just being dramatic or hyperbolic, a 2008 study conducted in the UK found that the countries 10,000 pug dogs were so thoroughly inbred that they were only as genetically distinct as 50 individual animals.

Incredibly depressing facts aside, like today, in the 16th and 17th century, the pug was insanely popular with collectors and dog lovers. So much so in fact that, as mentioned in the image at the top of this page, people would cart them around in private carriages in outfits tailored to match their drivers. How cute is that?

The pug seemed to be most popular with the rich folk of Europe with an unusually high amount of nobility choosing to own one throughout the years, including, but not limited to, Joséphine Bonaparte (Napoleon’s wife), Queen Victoria, William III of England, George V and the awesomely named William The Silent. Not to mentioned the hundreds, if not thousands of regular folk who bought one because it was cool.

In fact, according to legend, William The Silent was actually saved by his beloved pet pug Pompey, when it alerted him to the fact assassins were trying to sneak up on him to slit his throat. Which is entirely believable because the pug was praised across the continent for being an excellent guard dog.

So how did we reward this noble breed for the years of servitude they gifted us? We inbred them so much half of them can’t breath properly, you’re welcome, pugs everywhere!