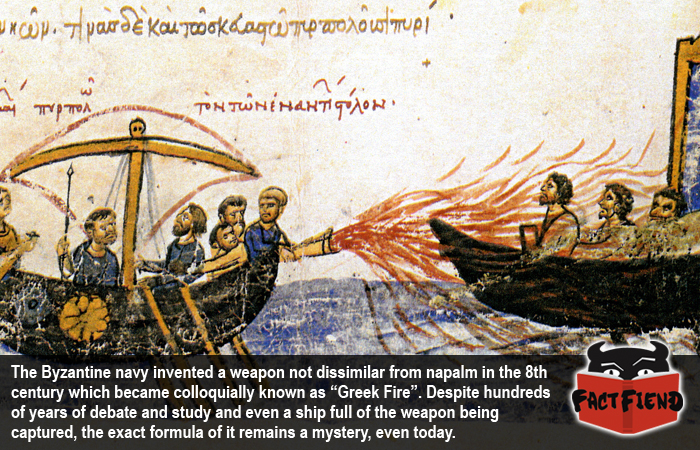 Today we have bombs that can level entire cities and guns that can shoot around corners, that said, the people of the past had some pretty nasty tricks up their sleeve too, for example consider the Byzantines who had a weapon we still can’t figure out today!

The weapon, colloquially known as “Greek Fire”, was feared throughout the ancient world due to the fact it could continue to burn on the surface the water itself. This allowed the Byzantine navy to smash their enemies in naval battles by turning the very ocean they were sailing on into a blanket of pure hell-fire. It also stuck to people and skin too, because setting fire to water wasn’t already a big enough dick move.

If that sounds at all similar to napalm, it’s because it was, the difference is it was created over a thousand years ago without the benefit of modern technology. Modern scientists have spent decades trying to figure out just how the Byzantines managed to make this stuff.

If you’re wondering why they’re so interested in this particular weapon, it’s because unlike almost every other fire weapon from history, it was projected out of a device almost identical to a modern flamethrower. Whereas other armies would either use pots filled with burning oil or fire arrows to set their enemies on fire, the Byzantines used actual honest to goodness flamethrowers to hurl the flame across the ocean.

As if that wasn’t terrifying enough, they styled the ship mounted flamethrowers to look like lions or dragons to make it look as if their ships were projectile-vomiting white hot liquid death at them. Obviously, the enemies of the Byzantines were incredibly keen to get their hands on such a powerful and psychologically damaging weapon, which is why the formula to Greek Fire was kept a secret. To date, no one in history has ever figured out how to make this stuff as good as the Byzantines could. A fact that is all the more impressive when you realise that ships full of this stuff were captured on several occasions.

The closest anyone ever came was in the 12th century, we know this because the Venetians used a weapon that was remarkably similar, but could be put out with sand and vinegar, which you couldn’t do with the version the Byzantines used, well not without setting yourself on fire in the process, which is never a good thing.