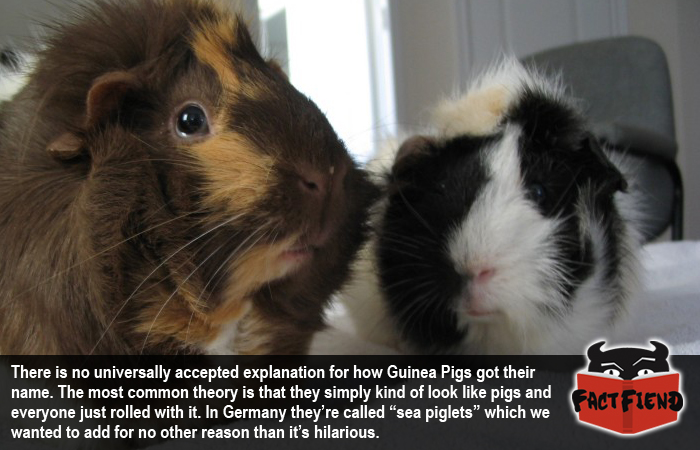 Humans have a fairly spotty track record when it comes to naming animals, sure we got it bang on the money with the rattlesnake and the goldfish, but for every animal we got right there’s a flying fox (which isn’t a fox) or king cobra (which doesn’t even wear an awesome tiny crown). Perhaps the most infuriatingly named animal of all is the guinea pig.

Before you crack open Google, no, guinea pigs do not hail from Guinea and they’re in no way related to pigs, like not even a little bit, save for the fact they’re incredibly squeaky and presumably taste great fried and served with eggs.

One theory is that the animals were originally shipped via Guinea, which resulted in people simply assuming that, that was where they came from and thus how they got their name. Which you’ll notice is stupid because it presumes people back then didn’t have the foresight to question where these fancy (and expensive) new pets were being shipped from. Considering they were favoured by nobility and royalty when they were first discovered, it’s hard to believe rich, educated people wouldn’t be at the very least curious about where this new exotic animal came from that sailors were asking them to pay through the nose for.

Another theory is that guinea pigs originally cost a guinea to buy, which again makes no sense since the first recorded instance of one being called a guinea pig pre-dates the actual first use of the guinea as a currency and calls into question how this theory ever came to be in the first place.

Frustratingly, the pig aspect of “guinea pig” is equally as difficult to pin down. A common theory is that they just really look like pigs, so when man first discovered them, he got lazy and thought “screw it, lets say they’re pigs”. A theory that makes a lot of sense when you realise that different cultures across the world came to a similar conclusion when naming them. As noted above the German’s call them,  Meerschweinchen (sea piglets) perhaps referring to the fact they were like piglets people brought across the ocean, or something, we don’t really know, we don’t speak German as well as we assumed. But even this isn’t airtight since some cultures think they look more like rabbits or even rats.

Another theory still is that the guinea pig was not dissimilar from an actual pig due to it being used as a source of food, early sailors were said to fill their holds with hundreds of guinea pigs as a readily accessible and easily stored source of fresh, fuzzy meat. Which again, is a great theory, but is blown out of the water when you realise the Spanish sailors, who also ate oodles of these things, referred to a guinea pig as “conejillo de Indias” which roughly translates to “small Indian rabbit”. Which is even more absurd and adds yet another layer to this onion of a problem.

Man, we think we now know why celebrities call their children stupid names. Scientists, linguistic experts and etymologists can’t even decide how shitting guinea pigs got their name, who are we to judge someone for calling their kid “Apple” or “Phaser” when that’s the case?