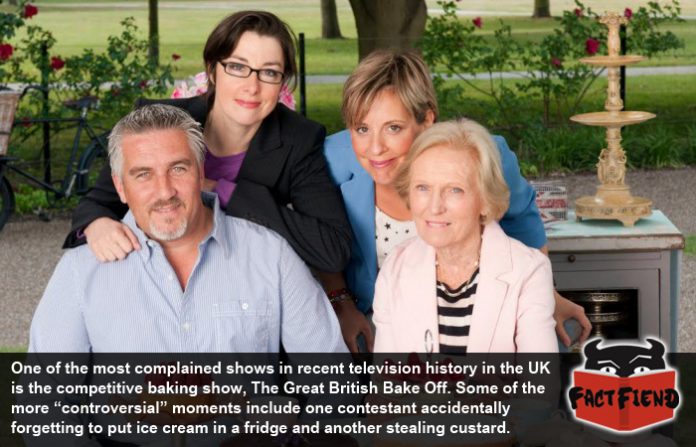 Anything popular is bound to court controversy at some point, that’s just the way the world works. If a million people watch you take a dump someone is going to be annoyed you didn’t wipe enough. With that in mind, lets talk about how people in Britain love complaining about a baking show.

For anyone unfamiliar with The Great British Bake Off, it’s basically like every other reality TV show you’ve ever seen only instead of contestants competing to lose the most weight or prove who can sing shitty pop songs the best, they bake cakes.

There are no cartoonishly villionous judges, you don’t have to call in to save your favourite contestant and you almost never see an argument devolve into a parking lot knife fight. It’s just a show about watching people make some kick-ass cakes. Also, since up until very recently the show was owned by the BBC, it didn’t even have any ads or product placement. In fact, in keeping with the BBC’s various guidelines for content, the show is as deliberately inoffensive and saccharine as possible. Which makes it all kinds of hilarious that The Great British Bake Off is one of the most complained about and controversial TV shows in recent British history.

For example a contestant in 2013 was raked over the coals by the media and demonised by the public after they accidentally used someone else’s custard, forcing them to profusely apologise for it in every interview they gave for the next month. On another occasion dozens of viewers complained after the show’s producers bought new kitchen mixers for a new series because they were worried that it would affect the quality of the cakes. The next time you feel like you’re wasting time reading dumb articles like this online remember people got so annoyed about a kitchen appliance they saw on TV they wrote an angry letter.

Don’t think that’s stupid enough? The show has also received complaints for showing an image of a squirrel in which you could clearly see its rather sizeable squirrel dong and contestants have been harassed for revealing that they’ve had professional training in baking before because the show is strictly for amateurs. By far the most ridiculous “scandal” though was the time a contestant forgot to put some ice cream into a freezer while making Baked Alaska. Said contestant was so frustrated that they threw their entire desert into the garbage and then presented that to the judges. 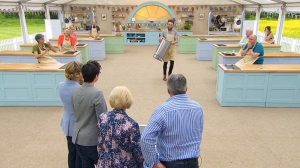 The footage for the episode was edited in such a way that it looked like another contestant had deliberately sabotaged the dessert when in reality the guy was just a fucking idiot. Which didn’t stop literally thousands of people harassing the shit out of the innocent contestant and thousands more from dissecting the episode like it was the Zapruder film. This is in addition to an estimated 800 people who sent strongly worded letters of complaint to the BBC demanding a formal investigation about what the hell happened. Remember, this is a show about baking cakes.

The scandal was so major that everyone involved with the show was forced to answer questions about it for weeks and it’s still consistently ranked as the show’s most shocking moment. Which is so adorably British we just might die.