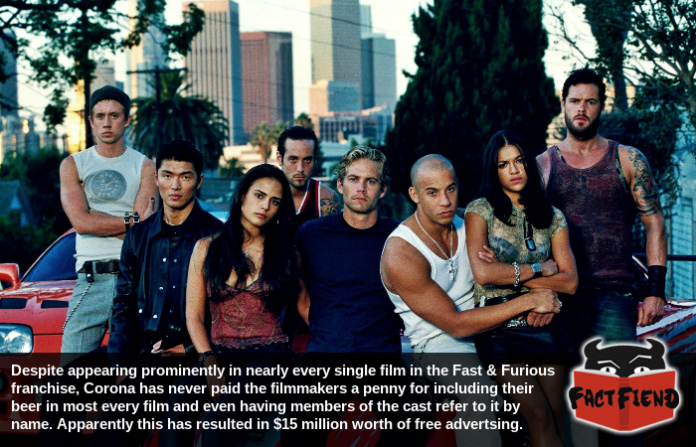 Product placement is a necessary evil of movie-making and you can bet your left nut that if you see a well-known brand in a movie, someone, somewhere paid for it to be there. That is unless you’re watching a Fast & Furious movie and notice the cast drinking Corona, in which case no fucker knows why its there.

To explain for anyone who hasn’t sat down and watched all 8 Fast & Furious movies in a row, Corona is drunk in virtually every single film in the franchise and is frequently referred to by name by members of the principle cast. Especially Vin Diesel’s character Dominic Toretto, seen here before he became the fourth most popular bald character in his own franchise. 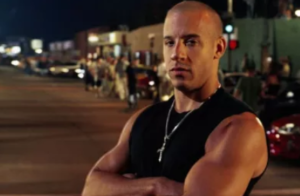 Now you wouldn’t be remiss for assuming that Corona must have paid something to have their product featured so prominently in literally the 8th most successful movie franchise of all time. Here’s the thing though, according to everyone involved with production of the Fast & Furious movies the brand has never paid so much as a dick-warm penny for its inclusion in any of them. Something that becomes immediately apparent when you realise that, unlike virtually every example of product placement where money has changed hands for it’s inclusion in a given film, the filmmakers don’t give a shit if the logo is pointed away from the screen when a character is shown drinking it. 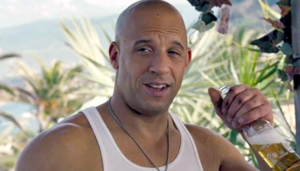 If you’re still incredulous that Corona hasn’t paid for being in the movies given how prominently it’s featured in some of the movies, you’re not alone. For example during one interview franchise producer, Neal Moritz openly referred to Corona as the “official beer of Fast & Furious” before adding that it’s position as the official beer of people who enjoy power-sliding around corners like a motherfucker in a Nissan Skyline is totally unpaid. Much to the astonishment of the interviewer who stated very matter of factly “You’ve done like hundreds of millions of dollars of advertising for them.” To which Moritz gave a shrug and basically said something along the lines of “well, yeah.”

For the curious, marketing analysts have concluded that the movies have given Corona about $15 million worth of free advertising, not hundreds of millions worth, but still, holy shit that’s a lot of free advertising. It’s also worth noting that every single time they release one of these movies, Corona sees a noticeable uptick in sales as a direct result of it being drunk by a group of hardened super-criminals and Kurt Russell’s beard.

Here’s the thing though, nobody is really sure why the beer is featured so prominently in Fast & Furious movies. One theory is that the beer’s inclusion is a knowing allusion to Point Break, which while convincing on paper, has never been confirmed by anyone working on the movies. In fact the closest we’ve ever gotten to an official explanation is a quote from a the director of the first film who simply explained that the beer’s inclusion in the film “just made sense” as something a bunch of people from South California would drink. Which makes sense, we guess?