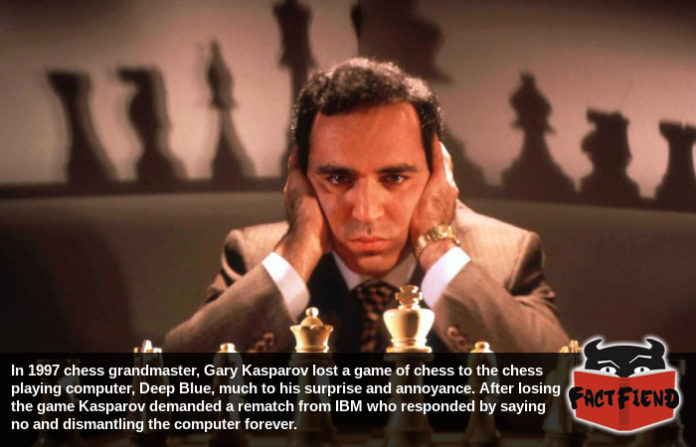 Despite the fact computers can analyse millions of possible scenarios in the time it takes most human players to scratch their balls, for many years it was the opinion of chess masters that a sufficiently skilled human could never be dunked on by a chess playing machine. That all changed in 1997 when IMB designed a computer solely to beat famed chess nerd, Garry Kasparov.

That computer was called Deep Blue, a frighteningly powerful piece of hardware with more computational horsepower than the Death Star. Designed by IBM, the original iteration of Deep Blue lost to Garry Kasparov in 1996, though it did manage to surprise the chess champion by winning the first game. Kasparov countered by employing “anti-computer” tactics in the following five games, basically playing less than optimal moves and stalling for time so that the computer would be confused about the “correct” move to make.

Before moving on, for anyone wondering how in the fuck Kasparov could plan further ahead than a computer that can analyse millions of potential moves per second, here’s some math. Now most chess masters plan at least 5 moves ahead, taking into account their moves and the possible counter moves an opponent may make in return. A computer can similarly plan this far ahead, however it must take into account every possible move and ever possible counter for every piece on the board. This may not sound like a lot, but it quickly adds up.

For example, at any point in a chess game there may be around 30 possible legal moves a player can make, to which an opponent could make around 30 counter moves, not all of these would be optimal, but they are possible. So just to plan one turn ahead a computer has to evaluate 900 possible scenarios. To plan two moves ahead it has to then take into account these 900 scenarios and the 900 scenarios that could spawn from them, which gets us to about 810,000 different possible end points by the end of each players second turn. By the time you get to each players 5th turn, the computer has had to analyse several quadrillion possible scenarios and pick which one is the most optimal. Even with a computer that could analyse a million moves a second, it would take an estimated 30 fucking years to analyse them all.

Because a skilled human player can disregard the vast majority of those less common moves and stick to known strategies, it actually puts them at a significant advantage over a computer in a competitive setting. This is because in most formal chess competitions you only get 3 minutes to think about your next move. Even if you program a chess playing computer to prioritise known, optimal strategies above all else, it can still be tricked by, as Kasparov did, playing sub-optimal moves or using deception (say by intentionally allowing a piece to be captured and playing it off as a mistake), something a computer isn’t capable of. Because of this, computers tend to play clumsy chess that prioritises capturing pieces over anything else, something a master player like Kasparov can take advantage of.

Kasparov was actually so cock-sure he was going to dunk on Deep Blue that he turned down an offer to split the $500,000 purse for the match 60/40, telling the organisers he’d prefer it to be a winner takes all tournament. Which worked out in his favor when he, you know, won it all.

This understandably irked IBM who took Deep Blue back to the lab and overclocked the shit out of it, greatly increasing it’s computing power and feeding it endless data about Kasparov’s past matches. They then asked Kasparov for a rematch, which he happily agreed to.

When the rematch rolled around, Kasparov strolled on stage and handily defeated the new and improved Deep Blue (known informally behind the scenes as Deeper Blue). However in the next game Deep Blue made a move so unexpected it caused a visibly exasperated Kasparov to break down and forfeit the match because he assumed the machine’s superior robotic mind had seen something he couldn’t.

It would later turn out that the move was the result of a mistake, a glitch caused by Deep Blue seeing no optimal strategy and simply moving a piece at random. Kasparov didn’t know this though and initially assumed IBM were cheating and was so annoyed at losing he lost his composure and subsequently, the next few matches, eventually losing to Deep Blue 3½–2½, winning one game, drawing 3 and losing to the machine twice.

Kasparov was furious at being embarrassed by the loss (he’d long claimed no computer would ever beat him at chess) and requested a final, deciding match between himself and Deep Blue. Which seems like a fair request, they’d each won one match and it would be a more decisive victory one way or the other if they made it a best two out of three competition. However, IBM, happy that they could now say they’d invented a machine that could beat a chess master at his own game (which had handily seen their stock price soar during the run up to the rematch), said no and immediately had Deep Blue dismantled. Which, if anything, probably explains why Kasparov looks so pissed off during every photo of that rematch.