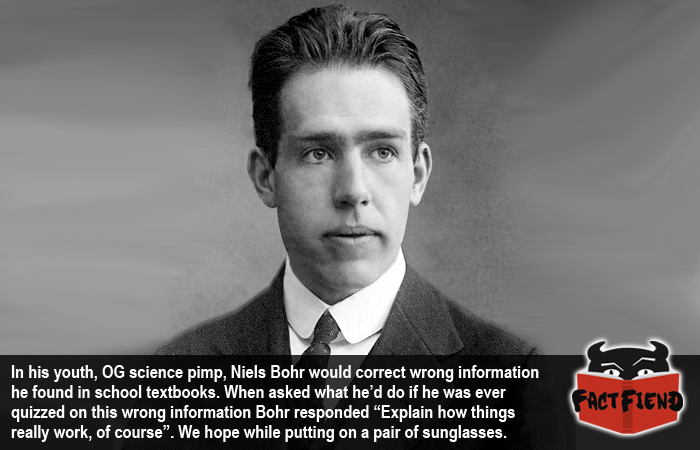 Niels Bohr is well known in pop culture as one of the finest scientific minds the world has ever known, even from a young age he showed his aptitude for science by routinely correcting any wrong information he’d find in his textbooks. But he was also a world-class smart-ass, as we’re about to explain.

As noted in the image above, when questioned about what he’d do if his teachers or peers ever quizzed him on the wrong information he’d found and corrected in his textbooks and whether he’d give the wrong answer just to get a good grade, Bohr rather awesomely responded that he’d just school them on how things (meaning the universe and possibly his balls) really worked. Proving that even at a young age, Niels Bohr didn’t fuck around when it came to education.

However, an even cooler story is the the time he reportedly trolled his university exam board for no other reason than screw them for daring to question his ability. Sadly, like all the best stories, we’re not sure if this is true because the story has been repeated so often and for so long, the original source is almost impossible to pin down, So we’ll tell you the story first and then let you decide if you think it sounds like something Niels Bohr would do.

The story goes that while studying in university, Bohr was asked the following question, or a variation thereof during one of his exams, “What’s the easiest way measure the height of a building using only a barometer?”. Bohr, demonstrating his supreme lack of fucks took his pen and wrote down “I’d knock on the door and ask how tall the building was in return for a shiny new barometer” how outstretched Bohr’s middle finger was during this answer, along with the exact wording varies from source to source but what happened next is fairly well established.

Bohr received a flat zero for his answer, which he contested on the grounds that he was technically correct (the best kind of correct), his university, in light of his previous flawless record of punching physics in the dick gave him a chance to improve his grade in a one-off 15 minute verbal exam where he’d be asked the same question by a board of his supposed peers.

Bohr supposedly sat in complete silence for most of the exam, when questioned about his reluctance to give an answer, Bohr explained that he was well aware that the answer they wanted him to give was to measure the pressure at the top and bottom of the building and compare the two results, from which he could calculate the approximate height of the building. Bohr then proceeded to list a number of ways one could calculate the height of a building using only a barometer, with each subsequent answer using an even more obscure or abstract method than the one before it.

After a brief, stunned silence, Bohr was asked by an incredulous university official why the hell he didn’t just write down one of those answers during his exam in the first place, after another brief pause Bohr pointed out to the official that he was asked to find the easiest way and in his eyes, knocking and asking someone who already had the knowledge seemed easier than walking up 80 fucking flights of stairs.

Now we this story is still classified as a legend by none other than Snopes, but be honest with us, doesn’t that sound exactly like something a kid who corrected his school textbooks at age 7 would do at university?