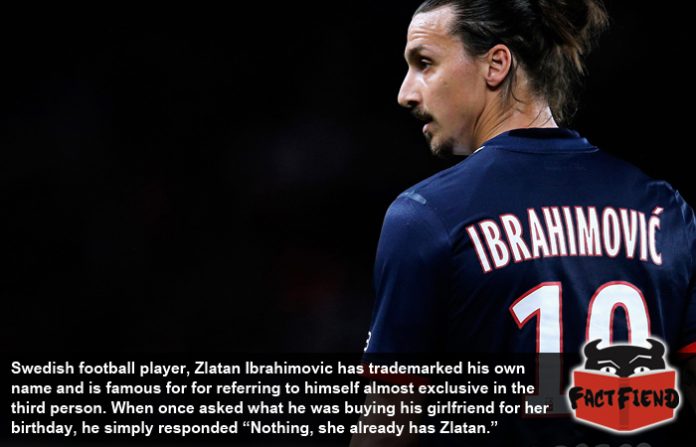 Zlatan Ibrahimovic or Zlatan Ibrahimović if you can figure out how to type that funny C with an accent above it is regarded by some as one of the finest footballs players to have ever lived. He’s also regarded as an arrogant cockpuffin, which would ordinarily be a bad thing if he wasn’t such a hilarious asshole about it.

Since talking about sport on the internet is like telling people you have a boyfriend when you’re a girl, in that as soon as you mention it a certain percentage of people just check the fuck out and stop listening to you, we’ll keep this first bit as brief as possible. As noted above, Zlatan is considered by many to be one of the finest strikers in football, thanks mostly to his ability to do things like this.

If you’re having a little trouble making out what’s going on in that GIF, basically it shows Zlatan scoring a goal from 30 yards away – already an impressive feat in of itself – upside down! 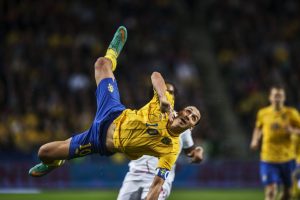 Unsurprisingly, years of being called the best player in the entire world and being paid hundreds of thousands of dollars per week to boot has given Zlatan an ego the size of an inflamed elephant testicle. For example, here’s how he responded when he was asked about his thought process behind scoring the goal discussed above on Twitter … 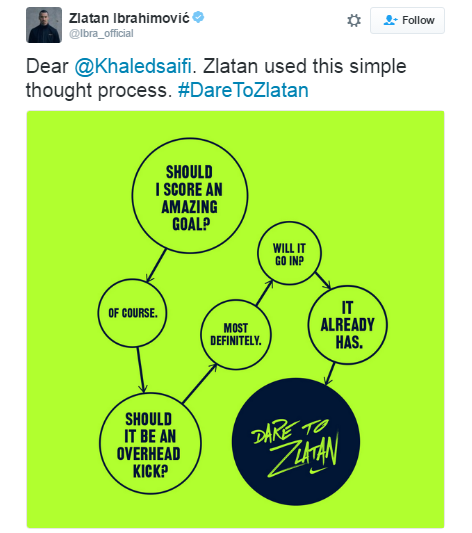 This answer was given during a Twitter Q&A with fans hosted by the footballer which he characteristically decided to announce by posting this picture on the website before asking Twitter to temporarily allow him to type more than 140 characters for one day to better answer questions. 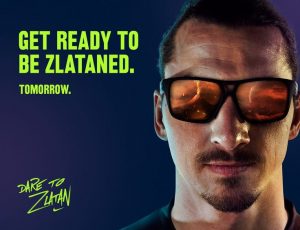 During the ensuing Q&A Zlatan dropped such pearls of wisdom as “Daring to Zlatan is easy. Start by trying moves that can’t be done. Keep trying until you are Zlatan.” and “a wise man once said, surprising your opponent is the key to surprising them. That wise man was Zlatan. #DareToZlatan”

As you can probably tell by those quotes, Zlatan likes saying his name, like, a lot. Well that’s probably because he’s taken it upon himself to trademark the shit out of his own name in his native Sweden. Ibrahimović did this after a satirical TV show in France coined the term “to Zlatan” in reference to doing something so outlandishly ballsy and with such supreme confidence, the only frame of reference for how ridiculous it was, is Zlatan.

Seeing a keen opportunity to market himself, Zlatan decided to Zlatan harder than he’d ever Zlataned before and apply for a trademark on the term, so that only he could use it in advertising related to sporting goods. Zlatan decided against applying for a more aggressive trademark so that other, lesser people could Zlatan as much as they pleased without fear of legal repercussions. For Zlatan understands that to impede the Zlataning of others would be a very un-Zlatan thing to do.

Because the noise his head made when he squeezed it through doors wasn’t quite obnoxious enough, the Swedish dictionary decided to give Zlatan a further ego boost by officially adding his name to the Swedish language. Specifically the added the word “zlatanera” to the dictionary a word that roughly translates to mean “to dominate“.

Zlatan has further demonstrated the emptiness of the bag of fucks he owns by being a legendary dick during interviews. Responding to comments that he’s gay by inviting a female reported and her sister to join him in his bedroom to see for themselves and commenting on the rumor he’d bought a Porsche by saying he’d bought a plane instead because it was faster.

Zlatan is so difficult to get a straight answer out of during interviews that he once just decided to up and interview himself, answering the questions posed to himself as bluntly as possible while simultaneously shitting just all over the goalkeeper who conceded the goal in the GIF at the top of this page. Why? Because he’s Zlatan and because he could.