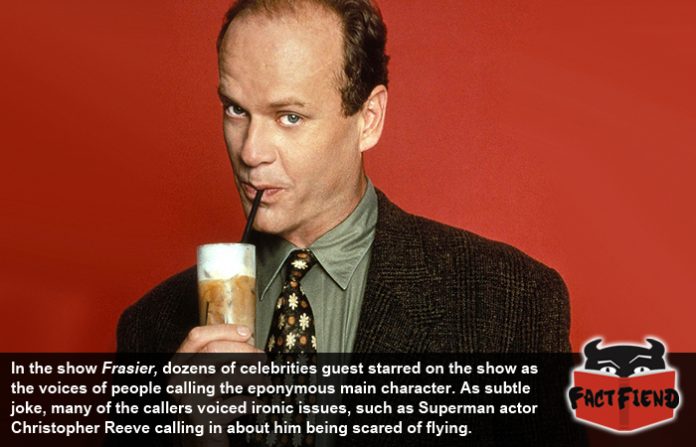 According to the esteemed internet knowledge repository known as Wikipedia, Frasier is one of the most successful TV shows ever made. It also had a metric shit-ton of guest stars, many of whom were given deliciously ironic reasons for appearing in it.

If you’ve never seen the show, basically the eponymous Frasier (played by Kelsey Grammer) is a radio psychiatrist living in Seattle. In most episodes Frasier receives a number of phone calls from people asking for his opinion on their various problems, for example in one episode a woman calls up because she’s depressed about the recent death of her boyfriend. On the surface this doesn’t seem all that strange, a little out of place in a comedy show sure, but not unusual. Until that is you learn that the voice of the woman Grammer is speaking to belongs to Linda “The Thickness” Hamilton.

You know, the same Linda Hamilton who plays Sarah Connor in Terminator, a film in which her lover is killed, causing her to become despondent and channel her sadness into a set of killer abs. That casting wasn’t an accident, the producers simply wanted to make a subtle reference to Hamilton’s most well known role for fans who recognised the caller as her. Then, because creative types aren’t known for their restraint, they went ahead and did the exact same thing for nearly every other guest star who ever had a cameo as one of Frasier’s callers.

For example, when they managed to convince Christopher Reeve to record a call for the show, they had him play an extreme agoraphobia who was terrified of flying or leaving the house which they found amusing because Reeve was famous for playing Superman. When they got Elijah Wood to call in, they gave him a role as a character who is worried about getting beaten up at school for being a nerd, a joke seemingly aimed exclusively at Wood’s personal friends and stalker who are aware that the actor was actually home schooled. Not obscure enough for you? Okay well when Eddie Van Halen had a guest spot, his voice is inaudible due to feedback. Get it? You know, because he’s famous for playing an electric guitar?

On a special Christmas episode the producers decided it would hilarious to only ask Jewish celebrities to be guest callers, for another where Frasier’s show is replaced by a sports show, they asked famous sportscaster Bob Costas to call in as if he didn’t know anything about sports because they figured someone, somewhere would recognise his voice and find it funny. A joke so obscure and in keeping with the show’s theme of referencing things nobody gives a shit about it blended in with the furniture in Frasier’s apartment.

Other obscure jokes included having a lesbian rock star, Melissa Etheridge call in to complain about having three boyfriends and composer Henry Mancini call in saying he hates the sound of his own voice, which Frasier responds to by playing him a song he composed. Like, we don’t want to make fun of Mancini what with him being a ghost now, but we can’t imagine many people watching Frasier knew who he was, let alone what his voice sounds like. Which didn’t stop the producers from inviting him to be a guest star for the sake of the 1 person who sits in the middle of the world’s most depressing Venn diagram. Because that one guy probably really appreciated it in between sobbing his eyes out.