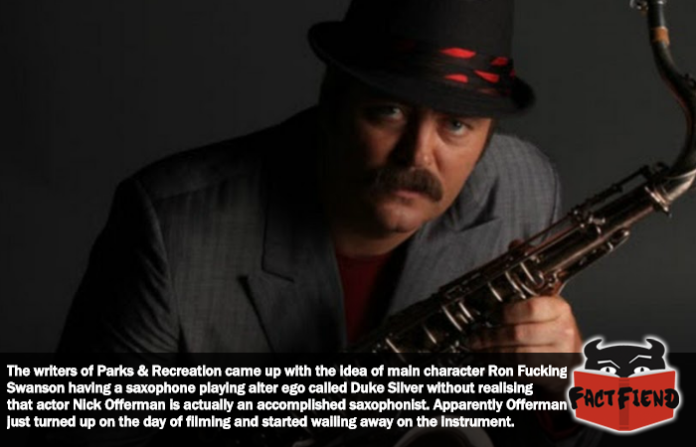 Like many actors who cut their teeth in the world of television Nick Offerman will likely be forever synonymous with his breakout role. In this case, burly mustachioed man of the people Ron Swanson from Parks and Rec. A fact Offerman likely doesn’t mind considering that he and Ron are so similar the writers on the show kept accidentally coming up with character quirks for Ron they didn’t know Offerman shared.

First though it’s worth noting that despite being one of the show’s breakout characters and stealing near-enough every scene he ever appeared during the show’s run, NBC were reportedly hesitant to cast Offerman in the role of Ron Swanson. Reportedly making the actor do endless screen-tests while they tried to find another actor for the part, something that annoyed the writers and producers who repeatedly explained to the network that there wasn’t anyone else better. Offerman was Ron. 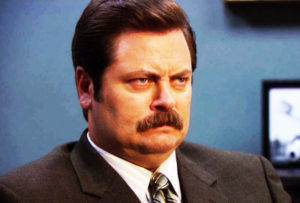 That’s not hyperbole by the way because during the shows run the writers of Parks and Rec were constantly bemused by how alike Swanson and Offerman and eventually just began letting him write lines for the character. Hell even Offerman himself has commented on this, noting that save for their differing political ideologies, the line between where Ron ends and he begins is blurrier than Bigfoot’s passport photo.

Traits shared by both Ron and Offerman include their love of all stereotypically manly things like fishing, scotch and bacon. Hell, he enjoys all these things so much that he reportedly skips the Emmys to go fishing, has used his fame to endorse various brands of scotch he likes and has a system for how to best decimate a breakfast buffet to maximise bacon intake. 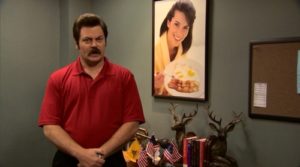 In specific regards to scotch, Offerman is especially fond of Lagavulin which just so happens to be the exact same brand Swanson enjoys to the point the character ends up buying the fucking distillery in the show’s final episode. Initially Offerman attributed this coincidence to the writers researching him only to find out they had no idea about his fondness for the brand when they came up with that element of Ron’s character.

Other traits shared by Ron and Offerman include the former’s talents as a woodsman and saxophonist, with the writers again having no clue that Offerman could play the instrument when they wrote a storyline about his character having an alter ego who happens to be a virtuoso saxophonist called Duke Silver.

While Offerman did tell the writers about this, largely because he was amuse by the coincidence, he reportedly didn’t bother to mention to his co-stars or of the producers that he could play the instrument and as a result, the first they knew about his prodigious saxophone skill was when he turned up to set in full Duke Silver costume and began playing the shit out of it. Which is well, very Duke. 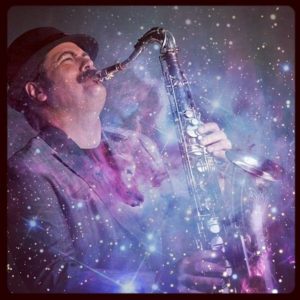 In another episode Ron becomes a self-defense teacher, a skill Offerman was once again able to convincingly showcase on-screen thanks to his background as a fight choreographer. Amusingly Offerman is also trained in kabuki theater and tried to incorporate some of these moves into the episode but everyone kept laughing too much.

Perhaps the most notable trait shared by Ron and Offerman though is that they’ve put their penis inside the same woman, Megan Mullally, who in the show plays Ron’s estranged ex-wife and in reality, is Offerman’s actual wife. Offerman was apparently very pleased when his wife was cast in the role and got so into a simulated sex scene with her that he literally ripped a fucking table off a wall. To ensure they got a realistic reaction from everyone present during that scene, neither Offerman or Mullally bothered to tell the extras in the scene that they were going to do this. 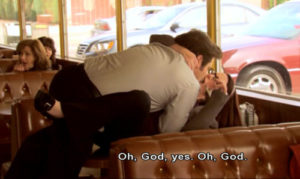 Producers on the other hand did know about this and were more muted in their reaction to the scene, though they were surprised when Offerman and Mullally removed their shirts while giddly running into a motel to get their fuck on, something that wasn’t in the script but the pair improvised because it just felt right for the characters. A statement we have a hard time finding fault with given everything else we’ve covered today.