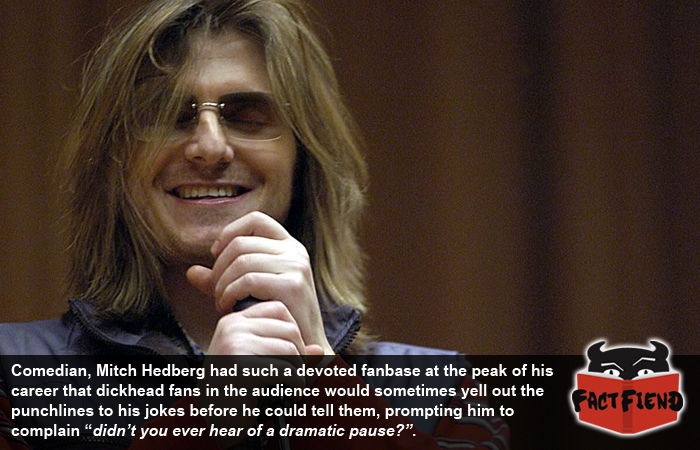 Hecklers, for anyone who has fortunately made it this far in life without encountering one, are dickheads who yell at comedians and performers in the middle of their set invariably because they lead an incredibly sad life. While most hecklers are content to simply yell obscenities at a performer in a tone of voice that lets everyone around know just how small their penis is, the ones Mitch Hedberg got were weirdly nice.

Mitch Hedberg has been described as the Kurt Cobain of comedy, in that he died at a young age at the apparent apex of his career and also did a fuck-ton of drugs. The main difference being that while Kurt Cobain openly admitted that drugs were a life-ruining vice, once famously being quoted as saying “Drugs are bad for you, they will fuck you up“, Hedberg was decidedly more, shall we say, devil-may-care in his attitude towards heroin, as shown by one of his most popular jokes:

Similarly to Cobain, Hedberg developed an almost cult following during his career, with it being noted that fans would endlessly share his comedy albums online and disect his joke to the point many of them knew them by heart. This in of itself wouldn’t have been an issue if these same fans didn’t feel the need to yell out the punchlines to their favourite jokes when Hedberg was about to tell them, robbing the rest of the audience of Hedberg’s infinitely superior delivery and proving to everyone present that they were a dickbeard of the highest possible magnitude. What makes this even more dickish is that Hedberg reportedly suffered from crippling stage fright, which is why he often performed wearing a giant pair of kick-ass sunglasses with his hair draped over his eyes.

Sometimes even this wasn’t enough and when he was feeling at his most uncomfortable, Hedberg would perform with his eyes closed or even with his back turned to the audience altogether so that he couldn’t see them. The fact he was even able to stand on stage and tell jokes, let alone become one of the greatest comedians of all time is a fucking miracle and it’s only made more impressive when you realise he also had to be constantly on edge about his jokes being ruined by people who called themselves his biggest fans. It’s no wonder this guy loved heroin when he had to worry about his own fans ruining one of his shows.

Despite being afraid of addressing crowds, Hedberg, like all good comedians, never shied away from calling fans who heckled him on the fact they were a total shithead, responding to someone ruining one of his jokes by asking if they’d ever heard of a dramatic pause, usually before they were booed into silently hanging their head in shame like a dog that had been caught eating one of its own turds.