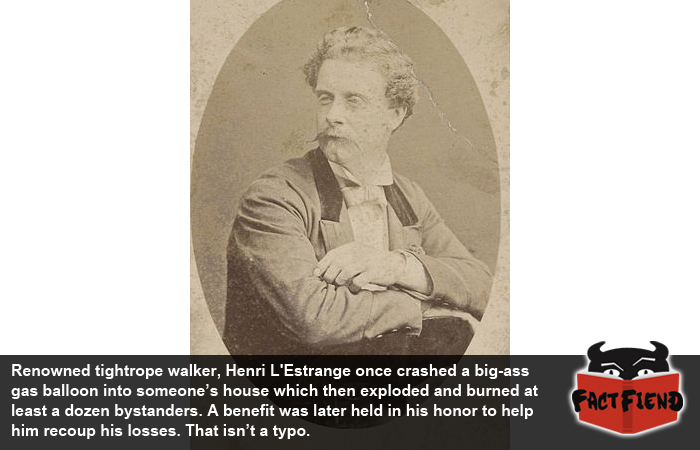 Henri L’Estrange may not be a name many of you are familiar with but it totally should be because he’s probably one of the simultaneously luckiest and unluckiest men to have ever lived.

L’Estrange was plagued by bad luck almost his entire adult life and throughout his long and bizarre career as an entertainer he was noted as being responsible for the following list accidents:

However, despite his many, many faults, every single time L’Estrange made a mistake or was DIRECTLY RESPONSIBLE FOR PEOPLE CATCHING ON FIRE a benefit would be held in his honor to help him through the tough times he had absolutely brought upon himself.

For example, as noted in the image above, L’Estrange crashed a balloon full of gas into a person’s home which later exploded burning a dozen bystanders who were trying to remove it. Nowadays the person responsible for an accident like that would have been punched in the dick so many times their ancestors would be born wearing boxing gloves, for some reason though, L’Estrange was never punished for being directly responsible for a dozen people being horrifically burned. In fact, a benefit was later held to help him pay off the debts he’d accumulated buying the balloon in the first place. Now if this was L’Estrange’s only mistake, that reaction would be kind of understandable but it wasn’t, it was the second time L’Estrange had crashed a balloon into someone’s house and had the public arrange a benefit to help him pay for it.

Now, we’re the first people to admit that, that all sounds pretty damn impressive, but we don’t think any of it is impressive enough to get away with crashing a giant bag of explosive gas into someone’s house, then again, this was the 19th century and L’Estrange did perform in Australia. Those guys deal with deadly spiders, snakes and scorpions on a daily basis, a giant flaming ball of gas was probably a welcome change from the unending nightmare that is trying to avoid every deadly creature in Australia.

But the main thing we want everyone to take away from this article is that there was once a guy who was so good at walking on a tightrope, people forgave him for crashing a balloon into someone’s house. If that’s not a goal to strive towards, we don’t know what is.