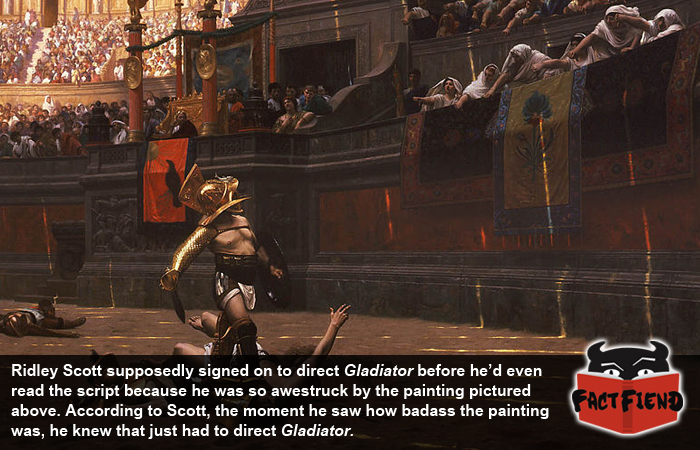 Gladiator is the loosely-based-on-true-events story of a Roman general who is betrayed, becomes a gladiator and then stabs Joaquin Phoenix in the liver. The film was released to reasonably good reviews and was partly responsibly for a spike in books about the ancient Romans. It was also inspired partly by a single painting.

As noted above, Ridley Scott signed on to direct Gladiator before he’d even read the script because he was so taken aback by the visceral brutality of the painting above. If you haven’t seen Gladiator or have little to no interest in the world of Ancient Rome the the painting is probably a little confusing, so we’ll try to explain it for you. The painting above is the work of a noted academic artist called Jean-Léon Gérôme and it depicts something known in Rome as Pollice Verso, which quite literally translates to “turning of the thumb“.

You see, when a Roman gladiator bested his opponent in combat, the decision of whether or not he should finish his opponent off with a well placed stab to the neck or let him live, but ultimately still smack him around a bit with the blunt side of his sword for shits and giggles, was left to the crowd. To demonstrate how they felt the crowd would either stick their thumb into the air, or conceal it neatly within their fist. The latter meant that they wished for the gladiator to be spared while the former meant that they wanted him to have a Gladius enema.

Oddly, despite being a avid fact-checker who was known for producing some of the most accurate historical paintings ever put to canvas, Jean-Léon Gérôme mistakenly depicted the baying crowd putting their thumbs down to indicate that they wanted the fallen gladiator to die. This single mistake led to the misconception that in Ancient Rome, sticking your thumb up meant that you wanted a gladiator to live while sticking it down meant you thought they’d had their chance. The misconception was so widespread that it even made it into the Gladiator movie which we should probably start talking about. 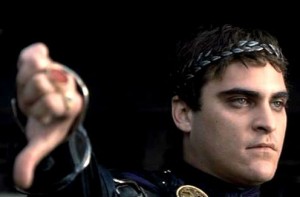 According to people who worked on the movie, a life-sized reproduction of the painting was taken and shown to Ridley Scott along with a copy of the script which apparently turned out to be completely unnecessary because Scott took one look at the painting and just knew that he had to be involved with any film that was going to convey that scene to an audience. In the end, it was probably a good thing that they showed Ridley Scott the painting before the script because he actually ended up hiring a guy to rewrite the entire thing because the dialogue was so terrible.

So thanks, Jean-Léon Gérôme, without you we wouldn’t have had a movie where Russell Crowe stabbed tigers for 120 minutes.