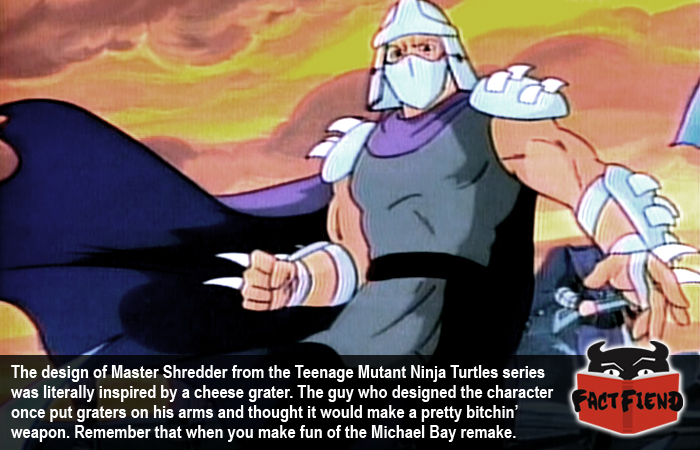 Lets not mince words here, Master Shredder is f*****g awesome, he’s a 7ft tall martial arts master clad in the raddest set of armor this side of the final three Star Wars movies and he was, for a time, voiced by Uncle God-damn Phil. Next to the walking power metal album cover that is Lord Zedd, Master Shredder is easily one of the coolest Saturday morning cartoon villains of all time, which only make the fact his design was partially inspired by a cheese grater all the more hilarious.

We don’t mean that one artist somewhere along the line based one part of Shredder’s costume on a really bitchin’ cheese grater he had in his kitchen or something like that. We literally mean that the guy who conceptualised and created Master Shredder in the first place, Kevin Eastman, based the entire character on the idea of someone wearing cheese graters on their arms and using them to punch people into finely grated powder.

As Eastman discusses here, while cleaning the dishes one evening he haphazardly put his forearm through a rectangular cheese grater like the one pictured above and grabbed hold of the handle. While dicking around with his new makeshift grater armor, Eastman began to think about how the grater actually had to potential to be a pretty metal weapon in the right, man-sized hands. In fact, he was so intrigued by the idea of a guy wearing two of these things and whupping backhanding ninjas with themthat he immediately set about incorporating them into a character for the Teenage Mutant Ninja Turtles to fight, the end result was Master Fucking Shredder.

In other words, Master Shredder as a character, was directly inspired by a guy running around his kitchen with two cheese graters on his arms pretending to be a ninja. Just keep that in mind when you see people bitch about Michael Bay ruining the series with his redesigns.