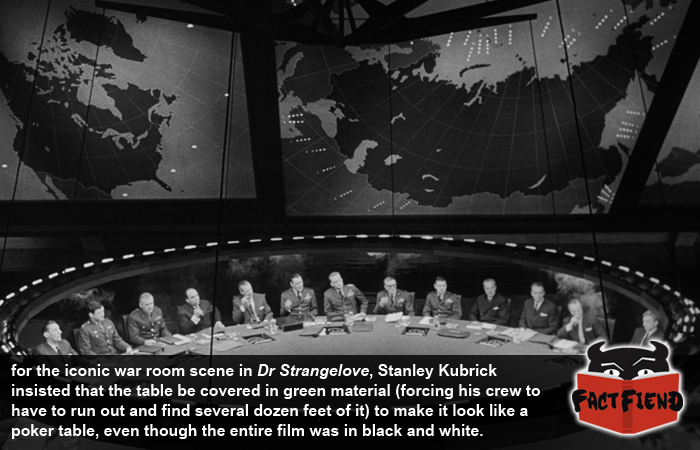 Stanley Kubrick has a reputation amongst film buffs and dickheads who like to drop his name into conversations about action movies to make people feel bad watching them as an insane perfectionist who would micro-manage almost every aspect of his films. This is perhaps no better proven than by that one time he insisted on making something green in a black and white movie.

That movie was Dr. Strangelove, a satirical film poking fun at the Cold War and doctors we guess that also holds the record for being one of the film’s most often parodied by The Simpsons.

Arguably one of the film’s most famous scenes, is the one in which military officials gather around a giant table and calmly discuss blowing the shit out of Russia at the risk of millions of American lives. As mentioned above, Kubrick demanded that when the crew made the table located in the centre of the room, which itself was part of a massive 130 foot wide set, that they covered it in the exact same kind of material found on a poker table.

Kubrick made this decision primarily because he wanted the scene to conjure up the image of military officials playing a game with the lives of millions of people. When asked why the material had to be green when the audience, you know, would never actually see it, Kubrick calmly responded “the actors will” before staring coldly at a passing group of birds and making them stylistically explode out of existence.

But Kubrick’s meddling didn’t stop there, for example several scenes of the movie are set inside of a B-52 Stratofortress bomber. Kubrick told the crew to make the set as accurate as possible, even though at the time, the B-52 was so state-of-the-art, the Pentagon wouldn’t allow the film crew to see the inside of one. Despite the immediate set back of having literally no point of reference, the crew were able to scrounge up a single photograph of a B-52’s interior and gain access to a  B-29 bomber, on which the B-52’s design was based. Using only these two things, the crew were able to construct a set so realistic that actual pilots called it “absolutely correct” when they were invited to see how accurate it was. Amongst other things, the pilots were impressed by the fact the crew had somehow been able to correctly guess the location of the B-52’s black box, which was classified information at the time.

This unsurprisingly set off alarm bells in Kubrick’s head who, for a while, suspected that his crew had broken into an actual B-52 to steal candid shots of its interior. We’d be tempted to say that this was bullshit if it wasn’t for the fact that we actually find it completely plausible that crew members were more scared of pissing off Stanley Kubrick than they were of being caught stealing classified secrets by the FBI.

For more facts about directors who were out of their fucking minds, why not read about how Japanese director, Akira Kurosawa once stole someone’s fucking roof just to make a shot look more scenic.