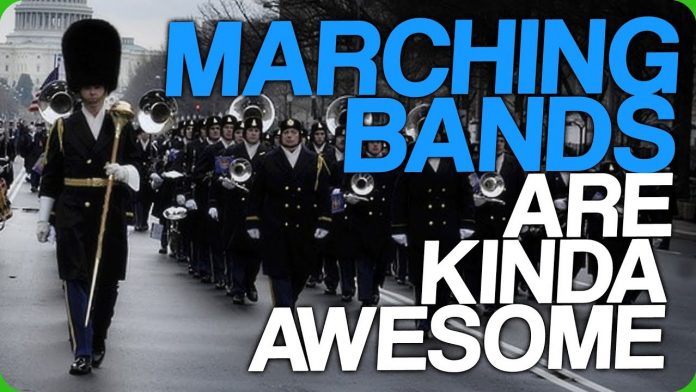 We’re assuming that, like us, most everyone reading this gleaned the majority of what they know about marching bands from that girl in the American Pie movies and that one episode of Spongebob. Which is a shame, because if you look into it even just a little bit, it becomes apparent that marching bands and the people in them are all kinds of hardcore.

For starters and to expand a little on the macro atop this very page, back in 2005 a guy called, Dr. Jeff Edwards grabbed one of the drummers for Indiana State University’s marching band and recorded all of his vitals during a routine erm, routine, you know, for shits and giggles.

According to the data collected by Dr Edwards, during the course of a regular half-time show the drummer’s heart rate was well in excess of 200 BPM for a significant portion of the performance and his overall oxygen intake increased by about 1300%, which seems like an excessive amount of oxygen to us, but hey, what the hell do we know?

To put this into perspective, the drummer’s heightened metabolic rate during the performance levels was likened to that of a marathon runner who’d inexplicably stopped mid-race to have their current metabolic rate tested while their heart rate was said to be virtually indistinguishable from someone currently in the middle of an 800 metre dash and/or being chased by several large bears. The only real difference being that while someone only runs away from a ursine predator for a couple of bear-tantalising seconds, the drummer performed at a comparable level for minutes. Which actually isn’t that surprising if you take even a cursory look into how marching bands train, because holy shit, do these guys train.

Although there’s no universal training regimen for marching bands, most of them from high-school level all the way up to the literal big-leagues require their members to be in comparably phenomenal physical shape to a regular person, often dictating that members take part in strength and endurance conditioning classes, before they even play or rehearse, just to be able to keep up. For anyone wondering why marching band members need to do strength and endurance conditioning training, we invite you to walk into a music store, pick up a set of tenor drums and try running that bitch out of the store into the parking lot without losing your breath, for the curious, drum sets like that can weight anywhere north of 30 pounds. Hell, even the kids (because remember this is a thing kids in high school do) playing lighter instruments like the electric triangle or kazoo who may necessarily not need to be burly enough to punt a toaster over a bridge, still need the endurance to march, run and jog for dozens of minutes at a time in perfect unison with a hundred other people.

Speaking of which, to get their routines as flawless of possible, marching bands, as noted above, can practise for anywhere upwards of 400 hours for each minute they actually perform. In less abstract terms this translates to about 16 hours of practise, per day for over a month for bands performing at the highest level. Even if you just focus on high school marching bands and rule out the people who literally do this for a living, it’s not that uncommon for members to practise for upwards of 40 hours a week on top of all the school work and homework they need to do to keep up their rep as huge nerds. Unless they’re in Texas, in which case they can only practise for 8 hours per week because it was agreed in 1997 by a board of parents and teachers that making kids march for 3 hours every day after school while playing upbeat music kind of made them feel dicks.

For anyone thinking that the marching band is probably still full of pussies the football team probably practise harder and for longer hours, on average, virtually every “normal” high school and college sport team in the country practise less than their school’s marching band. In fact, it’s not uncommon for people who know this who coach basketball and football teams to make their players sit-in on a marching band practise session to make them see the levels of skill and team synergy they could attain if they had a similar level of dedication. For example, Legendary basketball coach, Bobby Knight was known to take his players to see marching bands rehearse whenever they complained about him pushing them too hard to shut them the hell up and was once quoted as saying: “If a basketball team trained as hard as these kids do, it would be unbelievable.” Because let’s be honest here, when’s the last time you saw a basketball team move in perfect unison while also playing the theme song from Halo 3?

Then again, if high school football player learned how to work together like that, it’d only be a matter of time until a team ran rushed the end zone in a formation that looked exactly like a dick and balls.