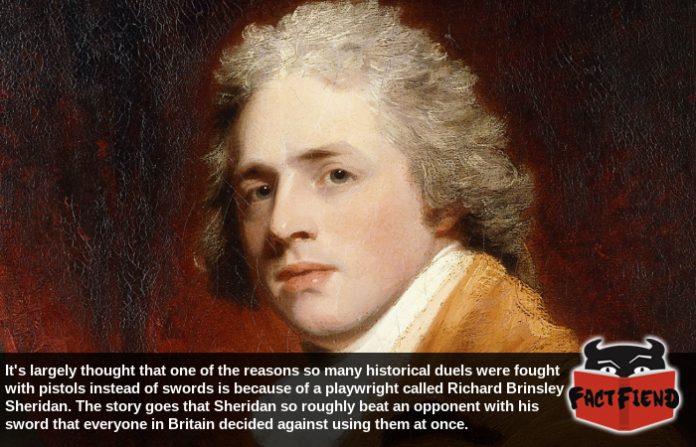 Back in the early 18th century when duelling was all the rage the weapon of choice for most honor-conscious gentlemen was a very pointy sword. This all changed though when an Irish playwright called Richard Brinsley Sheridan fought a duel so bloody and vicious it made everyone suddenly decided to start using pistols instead.

The story goes that sometime in the 1872, Sheridan read an article written by one Captain Thomas Matthews calling his soon-to-be wife a bunch of names. Infuriated by the slanderous accusations made against his fiance, Sheridan did one any self-respecting gentlemen of the era would do and challenged Matthews to a duel. While we’re unsure if Sheridan issued the challenge by roughly slapping Matthews about the head with a leather glove, we’re going to say that he did because it sounds cooler that way. 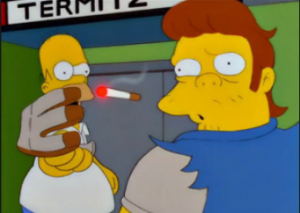 Initially the two men agreed to duel in Hyde Park but after finding it too crowded decided instead to fight in a tavern. In keeping with the customs of the time, both men agreed to fight with swords, a fact that seemed to heavily favour Sheridan who was almost immediately able to disarm Matthews like 20 seconds after the duel started. Rather than killing Matthews as he was well within his rights to do, Sheridan showed mercy and instead forced Matthews to sign a retraction to his article at sword-point. Satisfied with this result and seeing no need to further humiliate Matthews further by stabbing him a few times just to be a dick or something, Sheridan let him go and went home.

Unable to deal with the embarrassment of being so utterly and thoroughly dunked on, Matthews challenged Sheridan to a second duel, which under the informal rules of duelling, Sheridan was honour-bound to accept lest he be called a coward forever. Not liking the idea of that very much Sheridan begrudgingly accepted the challenge and once again got himself ready to duel. 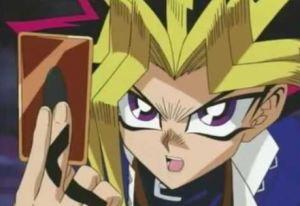 Unlike the pair’s first duel, which was noted as being a wholly bloodless affair that was over in seconds, this second duel ended up being a knockdown drag out brawl which saw both men being stabbed dozens of times each. With neither man willing to back down what began as an honourable duel with swords soon developed into a fistfight. Why a fistfight you ask? Well it’s reported that Sheridan and Matthews were baseball swinging their swords at each other with such force that each of their swords fucking shattered, forcing them to continue fighting with their bare hands.

The fight continued for several more minutes after this,during which time both men stabbed each other several more times with what remained of their swords while trying to tear each others’ throats out with their bare fucking hands. The duel finally ended when Matthews delivered a crushing hilt combo to Sheridan’s skull, an attack that left Sheridan lying unconscious on the floor in a pool of his own blood. Believing his honour to be restored a bloody Matthews declared himself the winner and similarly fell down half-dead. Each man would later recover fully from their wounds, with it only taking Sheridan a remarkable 8 days to feel good enough to leave hospital.

Although neither man died during the duel and both Sheridan and Matthews walked away with only a few scars, the sheer brutality they displayed when duelling fucking terrified men who’d similarly considered duelling. In fact, it’s noted that as a direct result of how horrendously vicious Sheridan and Matthew’s duel was, men began duelling with pistols instead of swords. Or to put it another way, the duel was metal that men across England unanimously agreed that they’d rather get shot in the face than try to walk off the kind of wounds they sustained during it. 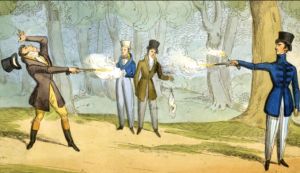