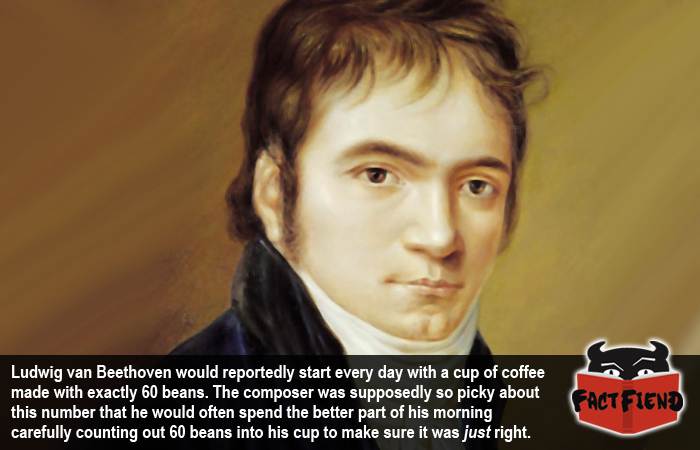 Whenever the name Ludwig van Beethoven is mentioned in conversation people tend to think of one of the two things, his music or his cameo in the Bill and Ted movie. Few people ever like to talk about the fact that Beethoven used to drink a cup of coffee so strong it could melt teeth every, single, morning.

As noted above, Beethoven couldn’t start the day unless he drank a cup of coffee that was brewed using exactly 60 coffee beans. Now the coffee drinkers amongst you may know have realised that this is around 10 beans less than the average cup of modern coffee contains. However, the thing to keep in mind here is that Beethoven wasn’t doing anything with his beans other than grinding them up and pouring boiling water all over them, so in comparison to modern coffee which is processed to hell before it reaches your cup, the amount of caffeine in one of Beethoven’s cups of coffee would likely force your heart to explode out of your chest.

As for why Beethoven felt that his morning coffee needed to contain exactly 60 beans, according to people who’ve studied the man way more than we have, Beethoven was under the impression that this was the exact number of beans necessary to make the perfect cup of coffee. As such, he would only drink a cup that contained exactly this amount, even if it meant that he had to sit there like a dumbass and count them out himself.

As to what Beethoven’s coffee actually tasted like, according to people who tried it it wasn’t half bad, which is surprising considering Beethoven was a famously awful cook who once fired and then re-hired his maid in a day because he couldn’t figure out how to work his own stove.