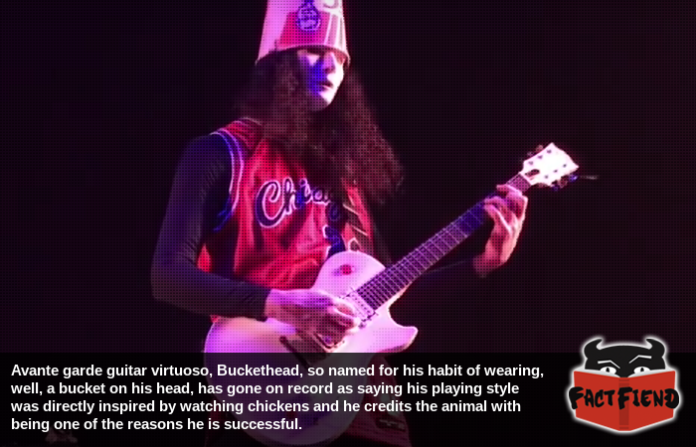 Whilst the name Buckethead might not mean much to the majority of people, amongst guitar aficionados and painfully obnoxious hipsters, it’s known for belonging to one of the most talented and weirdest guitar players in the world. A guitar player who directly credits his guitar playing prowess to chickens.

Born Brian Carroll, Buckethead has been shredding like a motherfucker near-constantly for the last few decades, singlehandedly rivalling the output of entire fucking studios. Putting out somewhere in the vicinity of 300 solo albums since his career began. If you’re currently thinking that surely some of these albums must have been filler or something, we should note that every single one contained at least 25 minutes of new music written and recorded solely by him.

If you factor in all of the guest appearances and collaborations Buckethead has made the number of albums he’s appeared on soars to well over 400 and that’s not even counting the shit he’s done and was never credited for because he was bored or all over the movie soundtracks he helped create. Because oh yeah, not content with releasing more albums than David Bowie, Michael Jackson and Queen combined he’s also appeared on the soundtrack for everything from Last Action Hero to Saw 2. If you’re currently thinking, pfft, that’s still not that impressive, we should also point out he apparently played the lead guitar on the main theme from Mighty Morphin Power Rangers. 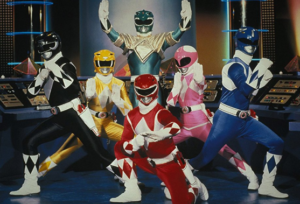 Well respected in the industry for his Prince-esque output of music and skill, Buckethead is an enigmatic figure, in part, due to his absolute refusal to perform or record without his trademark white mask and an empty bucket of KFC on his head. 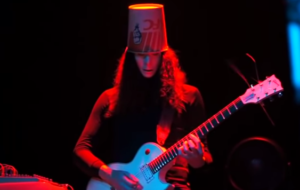 Most are willing to indulge Buckethead’s bizarre behavious because he’s simply that fucking good, though a notable example is the band Guns N Roses. You see, after Slash’s departure from the band Buckethead was called in to replace him on the album, Chinese Democracy. Buckethead was happy to step in but on the proviso they set up a chicken coop in the recording booth for him to sit inside. The band initially allowed Buckethead to do this, even going as far as to let him leave a lump of wolf shit in there after Axl Rose’s pet wolf puppy shit all over the floor and he ordered an assistant to leave it be because “he likes dog poop”. However the band drew the line when Buckethead insisted on having a TV inside of his coop that constantly played hardcore pornography he could watch as he played.

While touring Buckethead also caused friction with the band by insisting on performing a dance routine with a set of nunchuks before his schedules solos set to techno music and generally just being weird. Eventually he got so annoying that Axl Rose up and fired him and have you got any idea how much of an asshole you have to be before Axl fucking Rose notices? 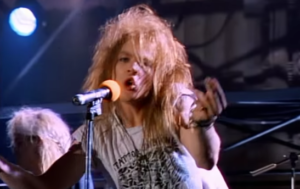 Notoriously shy, Buckethead rarely gives interviews and when he does so he absolutely refuses to break character, sometimes refusing to speak at all or communicating solely through a small puppet. To this end Buckethead has maintained throughout his career that he was raised by chickens and that the KFC bucket he wears on his head is a monument to all of chicken-kind. In addition the musician also claims that it is not him playing the guitar that he merely acts as a conduit for the millions of chicken souls through which they apparently communicate exclusively via shredding.

Whether this is true is irrelevant, what matters is that Buckethead absolutely insists that it is true and he has staunchly refused to credit anyone other than chickens for his talent while in character. Which if you’ll recall, is practically every interview he’s ever given. When asked about how he developed such an astonishing level of technical proficiency at playing the guitar, Buckethead has similarly always credited chickens, saying that he merely observed their pecking motions as a boy and replicated them on a guitar and noticed that it sounded nice.

A notable exception to Buckethead’s “never break character” rule though is the time he was called by guitarist Marcus Henderson about potentially recording a song for the game Guitar Hero 2, on which Henderson was working at the time. Buckethead, a fan of the series, said yes, asked for a few technical details and then hung up. A few days later Henderson got a call saying “this is probably the best thing I’ve ever recorded” and a few days after that he got a tape with the song Jordan on it. If you’re currently not shuddering at the mere sight of that song title there’s a good chance you never played Guitar Hero 2 because it’s noted as being the hardest song in the entire series, bar none. Something Buckethead was apparently exceptionally proud of.