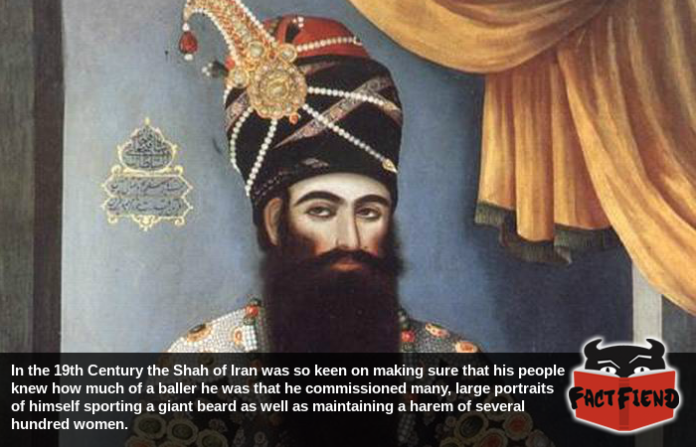 Fath-Ali Shah Qajar, better known to his people by a series of overly elaborate titles which we’ll get to in a moment, was the Shah of Iran for around 4 decades in the 19th century. While Fath-Ali Shah’s reign was certainly eventful, it’s actually his gloriously gigantic beard we’re going to be talking about today.

Although Fath-Ali Shah’s rule was marked by near-constant political turmoil due to the Russo-Persian wars, he was largely popular with his people thanks to the fact he wasn’t a complete and utter dickhead like the guy he took over from. His uncle, Agha Mohammad Khan Qajar.

This being a comedy site we’re not going to get into the more, unsavoury details, but all you need to know is that after brutally putting down a revolt one time, Agha Mohammad ended up sitting in his throne room in front of a pile of 20,000 recently removed eyeballs.  We’re not making that up.

Keen to differentiate himself from his uncle, a constantly angry sallow-faced sad-sack who’d had his balls cut off as a youth, Fath-Ali Shah endeavoured to show his people that he was a strong and powerfully virile leader. Mainly accomplishing this by establishing a harem some 1000 concubines strong, with whom he had daily sex when he wasn’t fucking one of his four insanely hot wives.

Fath-Ali Shah reportedly enjoyed sex with his harem so much that he went as far to have an opulent marble slide built into palace, down which his oiled and naked concubines would slide into his waiting arms and onto his waiting erection before being thrown into a pool. Or, to put it another, far cooler way, Fath-Ali Shah had a purpose built marble sex-slide in his palace.

Fath-Ali Shah also spent his life growing and maintaining a giant, waist-length beard (a sign of power and virility in Persian culture) that he was so proud of he had numerous, life-size portraits of him sporting it commissioned. No just satisfied with having sex with hundreds of women a day and owning a beard longer than a giraffe’s dick, Fath-Ali Shah spent what little free time he had exercising, giving him a toned, muscular build that gave him the strength and stamina to have all that sex in the first place.

The ruler also took to wearing a giant, three-tiered golden crown set with diamonds as well as impossibly opulent robes, also set with jewels, because why the fuck not? Fath-Ali Shah saw to it that many portraits were commissioned of him wearing this stuff, seemingly just so that as many people as possible knew how much of a pimp-ass legend he was. Which, well, we deeply respect.