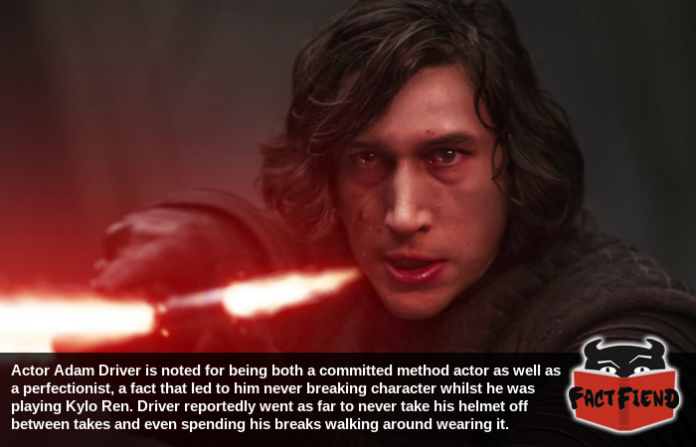 Portraying a villain in a blockbuster movie generally leaves actors with choices, treat that shit like it’s Shakespeare, or ham it the fuck up. According to most everyone involved with the production of The Force Awakens, actor Adam Driver opted for the former approach when it came to playing Kylo Ren.

You see, while you’d think pretending to be a large-dicked master of the force who is an expert in both swinging around a laser sword and dominating the minds of lesser beings would be fun, Adam Driver didn’t really think so. In fact, according to the actor he didn’t enjoy his time as Kylo Ren at all, spending the majority of his time on set angrily stomping around in his outfit and growling at his co-stars. Something he apparently found very easy due to how uncomfortable his outfit was, with the actor saying that he liked to channel how pissed he’d get during his costume fitting sessions into his performance as Ren.

To be clear because this makes Driver seem like a bit of a dick, his refusal to enjoy himself was a result of his admirable commitment to taking every role he plays super seriously, even if said role is that of a petulant, screaming man-child with the power of space telekinesis. According to his co-stars Driver absolutely refused to break character when he filming, going as far to sit alone in full costume between takes and eating his lunch away from anyone playing a character Kylo Ren didn’t like. Which, well, was everybody on set.

As an idea of how seriously Driver took this idea, he reportedly turned down an invitation to eat lunch and hang out with Mark Hamill so they could get to know each other because that’s not something Kylo Ren would do. While most everyone on set eventually came to accept Driver’s method acting, since it did result in some good-ass footage, John Boyega was determined to get him to drop his cast-iron facade. How? Well the actor revealed in an interview with Vanity Fair that he would randomly hug Driver all the time on set to see if he could coax a laugh or even just a smirk out of him. As you might expect given that Driver used to be a fucking marine, this didn’t work and Driver would apparently just stand there until the hug finished. Which, well, is very in character for Ren so props to Driver we guess. 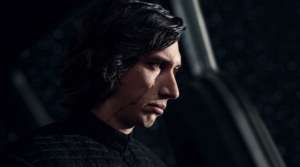 This all resulted in Driver being regarded as quite “intense” by his co-stars who nonetheless praised his unparalleled work ethic. Driver himself dislikes this label, instead claiming that he’s simply very committed to his roles and noting in an interview that he has fun sometimes. Though when pressed he struggled to note anything he does that people would consider “fun”, leading us to believe he spends his free time angrily working out in front of several mirrors.

That time a super secret group accidentally revealed themselves, to Gordon...