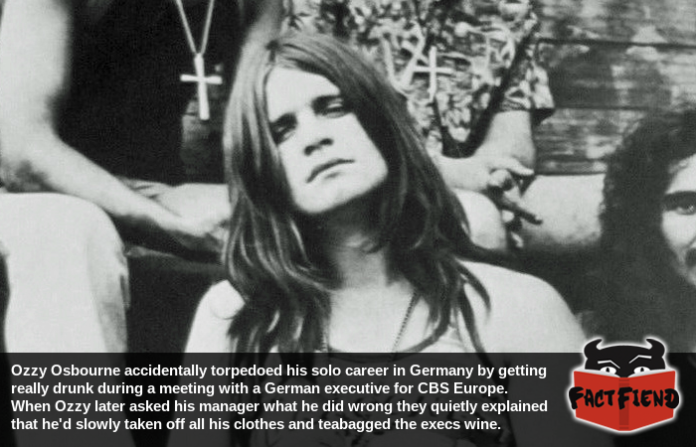 Few rock stars are as instantly recognisable as Ozzy Fucking Osbourne, a legendary heavy metal vocalist famed in the industry for spending 40 straight years launching a hellacious assault on his body with drink and drugs. Something that led to the singer accidentally torpedoing a record deal, with his balls.

To explain, for anyone unfamiliar with just how fucked up Ozzy would get in his prime, the singer was a living legend amongst his peers during his heyday for his almost superhuman tolerance for drink and drugs. Ozzy’s tolerance was such that guitarists in his band would frequently joke that he was fucking invincible with guitarist Zakk Wylde once describing Ozzy as tougher than King Kong and Godzilla, combined. 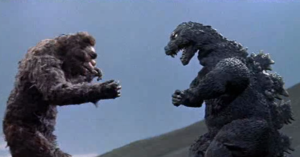 Hell, in 2010 a bunch of geneticists approached Ozzy to ask if they could sequence his DNA purely because they were curious about how he was still alive after 4 straight decades of alcohol and drug abuse. When they finally got a hold of some of Ozzy’s DNA they were amazed to discover that, from a genetic standpoint, he was basically a mutant.

The thing is, instead of being able to fire lasers from his eyes or float turds out of the toilet with his mind like one of the X-Men, he has the ability to metabolise various drugs and alcohol several times faster than ordinary humans. A proposed explanation for why he has been able to out drink every person he’s ever met while being a rock star. Because life is awesome sometimes, when the researchers responsible for this were asked by ABC why of all people they chose Ozzy Ozbourne for this study one of them simply responded “why not Ozzy?”. Which well, sure as hell shut ABC the fuck up.

The thing is, as much as Ozzy is able to process alcohol even he has had some issues with it over the years, the most famous example of which happened in 1981 when he was in the middle of trying to launch his solo career. You see, according to Ozzy’s own memoirs during a trip to Germany he was drunk in a meeting with a stuffy music executive and decided to lighten the mood with a little stripping. The thing is, Ozzy only thought he was stripping and had in fact done something much worse.

How much worse you ask? Well when Ozzy finally sobered up he saw his manager tearing up the contract he was set to sign while explaining how the company had vowed to never play one of his songs ever again – Before we move on we should explain that this was no idle threat and the company used to full might of its influence to ensure that no song featuring Ozzy was played in German for almost a decade – It was then that Ozzy joked that losing the contract was worth it for the striptease.

Ozzy’s manager didn’t appreciate this and angrily scolded the singer, telling him that while he had taken off his clothes, he’d also goose-stepped across the desk towards the executive’s seat and dipped his sweaty unwashed ballsack in his wineglass. A piece of information that surprised Ozzy who’d been under the assumption that he’d only pissed in the executive’s wineglass which is, better, we guess? Ozzy’s manager, wholly unimpressed, explained that this did happen but after he’d already dipped his balls in it.

It all worked out though because that manager later got their own back on Ozzy when they were both in a nightclub with some other music executives and Ozzy, for reasons known only to him, turned to the biggest guy in the club and asked them to punch him as hard as they could in the face. Because he was bored. After seeing Ozzy argue with the guy for a solid minute his manager leaned across the table and punched him in the head, asking the singer “happy now?”, to which Ozzy responded with blood dripping from his mouth “very happy, cheers.” If you don’t think that sounds like a happy ending we should point out that, that manager was Ozzy’s future wife Sharon.