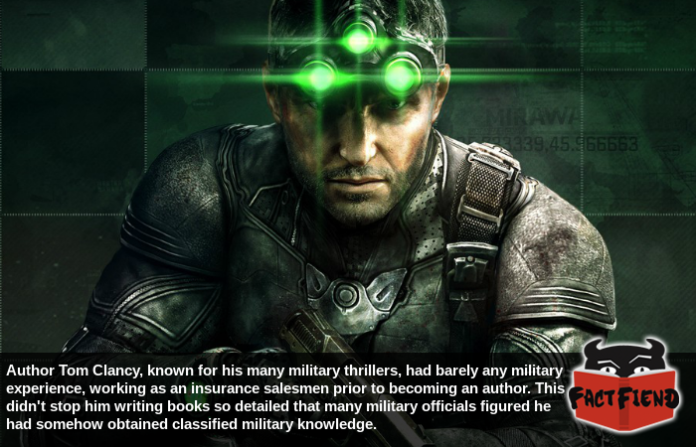 Tom Clancy is a name synonymous with tense military thrillers and video games where you shoot terrorists in the penis. Despite being widely considered one of the most accurate military authors to have ever lived, Clancy himself never served and got almost all of his information from books and board games to the reported disbelief of actual military officials.

You see, despite writing books about everything from defecting Russian submarines to terrorists bringing  America to the brink of nuclear annihilation, the totality of Clancy’s military experience was a brief stint in the Army Reserve Officers’ Training Corps, after which he became an insurance salesmen with a penchant for oddly intimidating sunglasses. 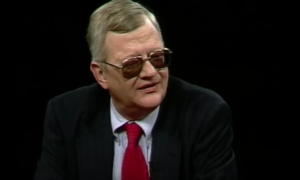 Not being able to serve (Clancy was horribly short-sighted which dashed his military dreams) didn’t stop him from voraciously consuming military literature and technical manuals, a hobby he’d had since he was a teenager. This gave Clancy an extensive, almost encyclopedic knowledge of military protocol, which he used to write over a dozen books about fictional military badasses that were otherwise unerringly accurate in regards to the military tactics, procedure and how much they shot terrorists in the dick.

The thing is these books were so accurate that military brass reading them assumed that he had some kind of insider knowledge about these matters as they couldn’t believe a civilian would have such detailed knowledge about things like how a Soviet submarine worked. A fact that becomes doubly hilarious when you realise in the movie version of that book, The Hunt For Red October, they got a fucking Scottish guy to play the Soviet captain.

In specific regards to that book, legend has it that when Clancy met with the US Navy Secretary the first thing they asked about his book was “who cleared it?“, in essence asking who in the government allowed him to divulge what they assumed were highly classified details about nuclear submarines. It was then that Clancy explained that nobody cleared his book and that he got all of his information from technical manuals that were freely available (if obscure), an interview with an actual Soviet defector and most amusingly of all, a board game about submarines warfare he bought for $10.

Clancy would later explain that he basically just guessed about shit that was actually classified, such as the weapons capabilities of a stealth fucking bomber, by simply reading what was publicly known and, in his own words, “connecting the dots“. This reportedly baffled the shit out of military officials who couldn’t believe that such a thing was possible. Hell, one of them even “jokingly” said that if Clancy was a military man, he would have court-martialed his ass for revealing military secrets.

Clancy himself reportedly found this hilarious and would joke at fancy dinners involving military brass that he didn’t want to know any classified information as he preferred to piece it together on his own. Something we presume went down just great as military officials are well known for their sense of humor.

The really bizarre thing about Clancy’s knowledge of military technology though is that he once admitted to just making up shit in his novels that ended up being true. Which is presumably why the video games bearing his name in recent years have just said fuck it and started introducing all kinds of future shit. 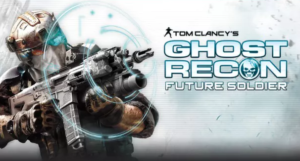