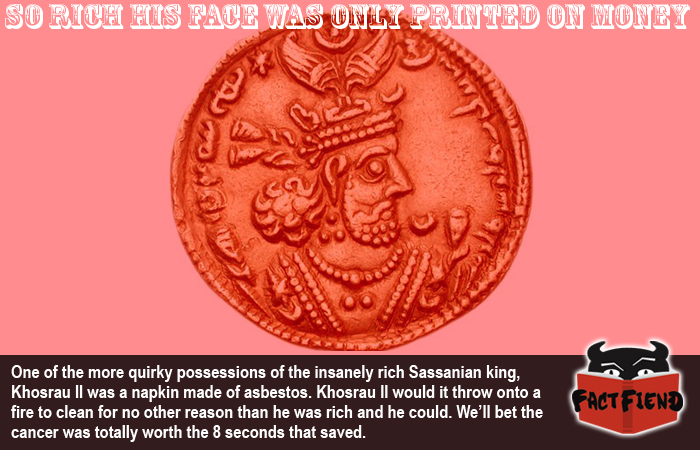 Being rich comes with a ton of perks, one of which is the ability to wipe gold plated chicken away from your mouth with a rag made of poison. Well if you were rich, Persian and stupid in around 500-600 AD you could anyway.

Though today asbestos is well known for being as deadly as the shavings of Chuck Norris’ beard, go back a few hundred years and you’d find that any rich dumbass who wanted a party trick would have tons of the stuff. Many ancient cultures and people have been aware of the remarkable fire-proof properties of asbestos, though some cultures have used it to make bitchin’ fire-proof armor and clothing. Others used it for decidedly more trivial means.

For example, one of the more unique exports of the Persian empire were napkins made of asbestos, if you think that sounds like the worst idea ever, we don’t blame you because it kind of was. However, these napkins were insanely easy to sell purely because of a single feature. You cleaned them by throwing them onto a fire. Just for a second imagine if a salesmen walked into your house and tried to sell you a t-shirt that you cleaned BY SETTING IT ON FIRE! You’d rip that guys arm off and shove you entire life savings down the hole before he could even finish talking.

Which is presumably why the one owned by Khosrau II (sometimes spelled, Khosrow II) is mentioned more in literature than the solid gold throne covered in rubies he ate dinner on. It’s noted that Khosrau II liked to entertain, or confuse guests into thinking he was wizard by wiping his mouth on his death rag before cleaning with a healthy dose of vitamin fire. Say what you want, but we know a few of you reading this would seriously debate the risk of lung cancer to look that cool.