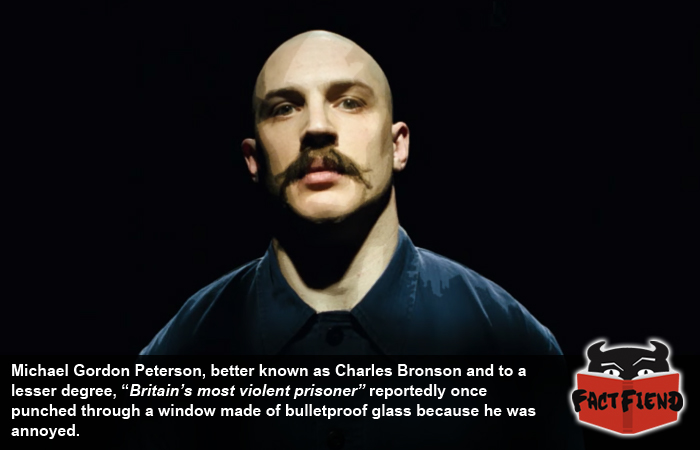 The hotly contested title of “World’s strongest man” is something we’ll probably never know for sure because defining strength is a difficult thing to do. That said, Charles Bronson is probably a contender for the title, even though he’s in his 60’s and also in prison.

Bronson, pictured above being portrayed by Bane, is infamous in the British penal system for being one of the most violent and difficult prisoners they’ve ever dealt with, mostly because he’s strong enough to do pretty much whatever the fuck he wants. Hell, he’s so strong he even grew a kick-ass, old-timey strongman moustache for a while just so people knew he meant business.

Bronson has pretty much spent almost his entire adult life in prison and the vast majority of that time has been spent in solitary confinement working out, because well, what else is he going to do? By his own admission Bronson does thousands of push-ups every single day and when he decides to activate beast mode he can reportedly do 131 push-ups, in two minutes. This is on top of an intensive regime involving every kind of exercise you can think of, including hours upon hours of exercises focussed solely on strengthening the dick region. Seriously.

Bronson is so strong that one time he ripped a prison washing machine that was cemented to the floor out of the wall and threw it across the room in a fit of anger. During the rare times Bronson was allowed to interact with other inmates, he’d entertain himself by picking them up and using them as human free weights and he could often be seen jogging around the prison yard with three men hanging from his back. Another time he didn’t like how a prison official was talking to him so he picked him up and sprinted away. Another time Bronson got bored and bent the bars to his cell with his bare hands, when the guards told him to stop, he kicked down the reinforced steel door meant to keep him prisoner. Bronson simply did not give one iota of a shit.

Bronson has spent so long in solitary confinement in the dark that he needs to wear special glasses to protect his eyes from sunlight and is so feared by prison officials that when those glasses were broken in a scuffle with guards. The guards, instead of pressing charges, offered to pay for his glasses while apologising profusely.

But perhaps the most insane feat from Bronson and almost certainly the one that supports his notion that he’s the world’s “naturally strongest man” is when he punched clean through a sheet of bulletproof glass for no particular reason without hurting his fist. In fact, the only injury Bronson sustained from the incident was a cut on his arm, when he tried to pull his hand out of the jagged hole he’d just punched into the material designed to stop fucking bullets!

What makes this all the more surprising is that Bronson is supposedly a really nice guy when he wants to be. Virtually every penny he makes from the numerous books and poems he’s written (yes the man who could technically punch his way out of prison writes poems) goes straight to charity and a lot of his more violent outbursts were provoked entirely by poor treatment from prison staff.

In 2014 he officially changed his name to Charles Salvadore and renounced his violent ways, he’s spent over 40 years in prison.

He also once kidnapped someone and forced them to tickle his feet, because he was lonely and “hadn’t had his feet tickled in years“.  He’s complex is what we’re saying.